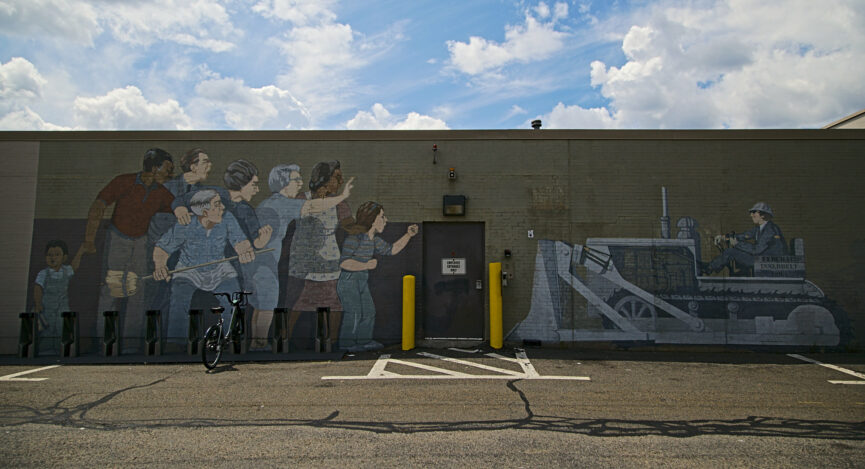 Beat the Belt by Chris Ball on Flickr (CC BY)

The Inner Belt was a proposed eight-lane highway that would have connected U.S. Route I-93 to U.S. Route I-90 and I-95 through a ring road through Somerville and Central Square and across the B.U. Bridge and beyond through Boston to the Southeast Expressway. A group of city planners, community activists, universities, and politicians formed a coalition to block the construction of this road. Their actions preserved much of Cambridge and attracted national attention as one of the earliest community efforts that blocked an infrastructure development. It became the rallying cry of many later political movements in Cambridge.

The Inner Belt was a proposed 8-lane expressway/interstate highway that would have begun at Route I-93 in Somerville and circled through Cambridge near Central Square, crossed the Charles River near the BU Bridge, touched a portion of Brookline, crossed the Fenway and passed the Museum of Fine Arts, moved on through the Roxbury section of Boston to connect to the Southeast Expressway at the point where it joins the Central Artery heading toward downtown Boston. The Inner Belt and Central Artery thus would have joined to create a ring road around and through the inner Boston area, with major intersections along it: at a proposed extension of Route 2 from Alewife, at the Turnpike in Allston, at a proposed Southwest Expressway (I-95 South) originating in Dedham, at the Southeast Expressway, at a new tunnel under Boston Harbor (I-95 North).

Opposition to the Inner Belt had begun in the 1950’s in Cambridge; opposition to the Southwest Expressway originated with environmentalists in the outer suburbs and neighborhood activists in the inner city. A group of city planners, community activists, universities, and politicians formed a coalition that by 1969 had become a region-wide alliance that included groups and officials from Brookline, Cambridge, Dedham, Lynn, Milton, Needham, Revere, Saugus, Somerville and Boston’s East Boston, South Boston, Roxbury, Jamaica Plain, Hyde Park, and the South End.

As a result of community and political pressure, Governor Frank Sargent in early 1970 ordered a moratorium on plans for the expressway network, and called instead for a 3-year Restudy (The Boston Transportation Planning Review) of the proposed highways as well as proposed transit extensions. The Restudy produced the first Environmental Impact Study in the country following the enactment in 1969 of the National Environmental Policy Act. The Restudy had a “technical assistance” component to aid neighborhoods develop alternatives to the highways, as well as alternative alignments for transit extensions. In 1971, the Governor rejected the Inner Belt; in 1972 he rejected the Southwest Expressway and I-95 North; and in 1973 he approved plans to extend the Red Line from Harvard Square to Alewife along a new alignment via Porter and Davis Squares. The Governor also led the successful effort to change federal law so that funds designated for Interstate highways could be used instead for transit — funds that were used for the extensions at both ends of the Red Line and for the relocation of the Orange Line in Boston.

Cambridge had a major role in battling one highway for decades and eventually sparking a process that created a powerful coalition that led officials to remake transportation policy for the Boston area inside Route 128, with an emphasis on transit, rather than highways, for access to the inner core of the area. This was a policy that had long been advocated by Governor Michael Dukakis, who succeeded Sargent as governor in 1974.

Chronology of the Inner Belt