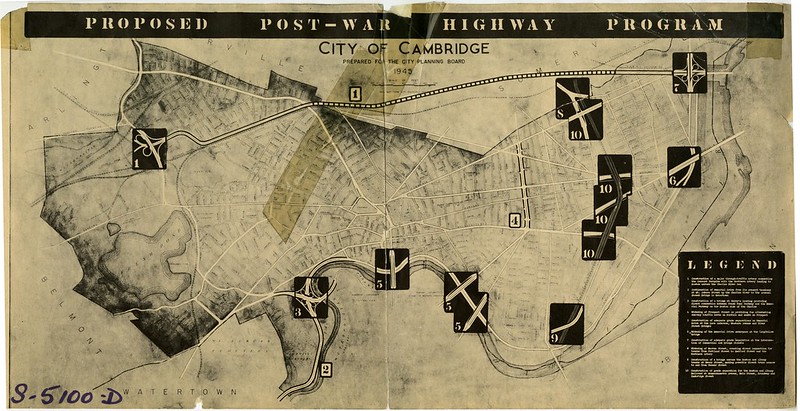 In 2012, the Cambridge Historical Society held a three-part symposia on the Inner Belt in Cambridge. The events were co-sponsored by MIT, Livable Streets, and the Lincoln Institute of Land Policy and were underwritten by Irving House and Forest City. The planning committee included Karilyn Crockett, Richard Garver, Michael Kenney, Gavin Kleespies, Alyssa Pacy, and Jim Peters.

Fred Salvucci, Tunney Lee, and Robert Goodman will speak on the role city planners played in working with community groups. This program will be held in the Stata Center at MIT, Room 32-155. Download program one booklet here.

Program Three: The Legacy of the Inner Belt
Jack Wofford, Anthony Flint, and Susanne Rasmussen will talk about the impact the fight over the Inner Belt had on the city planning and the way people think about transportation. The program will be held in the Lecture Hall of the Main Branch of the Cambridge Public Library at 449 Broadway. This program had earlier been planned to be at the Lincoln Institute of Land Policy at 113 Brattle Street, but we had to relocate due to the popularity of the event. Download program three booklet here.

Ansti Benfield was one of the founding members of the opposition to the Inner Belt. She recruited friends and neighbors and participated in countless meetings, discussing tactics from letter writing campaigns to direct action. She was a leading member of Save Our Cities and Neighbors United, the groups that led the citizens opposition to the proposed infrastructure. She completed a MA in Urban Studies from Boston University in 1968. Her thesis was titled “Inner Belt.”

Anthony Flint is a fellow and director of public affairs at the Lincoln Institute of Land Policy, author of Wrestling with Moses: How Jane Jacobs Took on New York’s Master Builder and Transformed the American City (Random House), and a former Boston Globereporter.

Gordon Fellman, a professor of sociology at Brandeis University and one of the founders of Urban Planning Aid and the author of The Deceived Majority, which explores the history of the Inner Belt struggle.

Robert Goodman, who received his B.Arch. from MIT, is emeritus professor of environmental design at Hampshire College. He has also taught urban planning and architecture at MIT, the University of California, Berkeley, and Columbia University. Mr. Goodman was a founder and the first president of Urban Planning Aid, which provided professional planning help to low-income communities, and his work including helping community activists argue the case against the Inner Belt at various government forums. He is the author of After the Planners, an attack on the ways in which architects and planners contributed to the destruction of neighborhoods and failed to provide for people’s needs. Mr. Goodman also wrote The Luck Business: The Devastating Consequences and Broken Promises of America’s Gambling Explosion and The Last Entrepreneurs: America’s Regional Wars for Jobs and Dollars. He is currently completing Joy Ride: Reinventing American Transportation.

Ann Hershfang was an instrumental part of the South End component of the protest against the Inner Belt. She was later the Women’s Transportation Seminar (WTS) Boston president from 1985 to 1987 and served on the board of directors for Massport and the Massachusetts Turnpike Authority, as well as serving as Undersecretary for the Massachusetts Department of Transportation. She was a co-founder of WalkBoston and is still a leader in the effort to improve pedestrian safety and walking conditions.

Tunney Lee is a senior lecturer and professor emeritus at MIT. He was the head of the Department of Urban Studies and Planning at MIT from 1986 to 1990. He studies the experience of neighborhood and city planning in Boston and Hong Kong with a special interest in high density urban settings. He is the former chief of Planning and Design at the Boston Redevelopment Authority and the former deputy commissioner for the Massachusetts Division of Capital Planning and Operations. At the early stages of the opposition to the Inner Belt, Lee worked with Fred Salvucci and other planners to provide technical assistance to neighborhood groups.

Barbara Norfleet was a Senor Lecturer in the Visual and Environmental Studies Department at Harvard University from 1981 until she retired in 1996. She remained a curator of photography until 2001 and is still an advisor to the Department. She received her B.A. from Swarthmore College and her M.A. and Ph.D. in social relations from Harvard University and Radcliffe College. Her works have been widely shown in the United States and Europe. She has written over 15 publications. One of her first was Six Speak, a book of photographs and words that showed families and their homes that would have been destroyed by the construction of the Inner Belt.

Fred Salvucci is a Senior Lecturer and Senior Research Associate in Civil Engineering at MIT. He has worked as a civil engineer, specializing in transportation, with a particular interest in infrastructure, urban transportation, public transportation, and institutional development in decision-making. He served as transportation adviser to Mayor Kevin White of Boston between 1970 and 1974 and then as secretary of transportation of the Commonwealth of Massachusetts under Governor Michael Dukakis between 1975 and 1978 and again from 1983 to 1990. In those roles he participated in much of the transportation planning and policy formulation in the Boston urban area and the Commonwealth of Massachusetts of the past 35 years, with a particular emphasis on the expansion of the transit system and the development of the financial and political support for the Central Artery/Tunnel Project. Working with Tunney Lee, Salvucci provided technical assistance to community groups.

Jack Wofford is a mediator, facilitator, and arbitrator with his own national and international practice based in Cambridge. He was a fellow and associate director at the Institute of Politics of Harvard’s Kennedy School and director of a study of Legal Issues in Urban Transportation at Harvard Law School when he was tapped to be the director of the Boston Transportation Planning Review, the 3-year Restudy which examined highway and transit controversies for Governor Sargent. After rejecting most of the highways, the governor named Jack associate commissioner of the Department of Public Works in charge of highway construction. He then became the first director of the Central Transportation Planning Staff under Governor Dukakis, and later the deputy general counsel of the US Department of Transportation in the Carter Administration. Jack was a law clerk for a United States District Judge, a partner in the real estate department of a Boston law firm, and a senior mediator at Endispute, Inc. In 1999, President Clinton appointed Jack to the Federal Service Impasses Panel, which resolves disputes between the federal government and its unionized employees; he served until 2002. He is a graduate of Harvard College, Harvard Law School, and Oxford University, where he was a Rhodes Scholar.