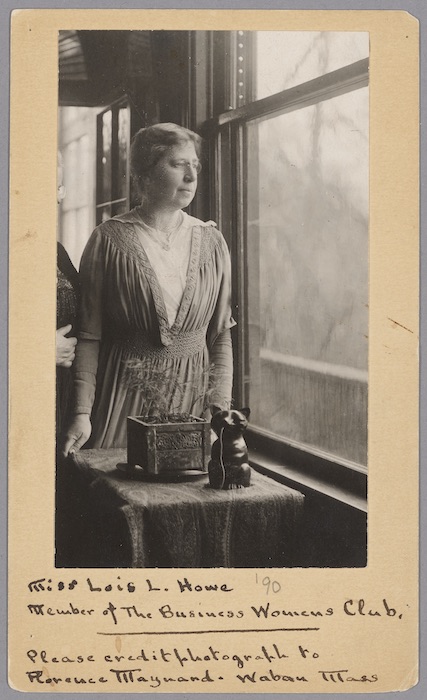 Born and bred in Cambridge, Lois Lilley Howe (LLH) (1864-1964) was one of the first women to graduate from Massachusetts Institute of Technology’s architectural program, the organizer of the only all-woman architectural firm in Boston in the early twentieth century, and the first woman elected as a Fellow of the American Institute of Architects.

With partners Eleanor Manning and Mary Almy, the firm of Howe, Manning & Almy, Inc. completed more than 500 projects over 43 years of practice. Many of these buildings are still standing today, including in Cambridge.

We are proud to claim LLH as one of “ours.” She was a lifelong Cantabrigian with deep ties to her community, and an active member of the Cambridge Historical Society well into her eighties.

As part of our year asking “Who Are Cambridge Women?” we have enjoyed researching her life and work, and share here information by, and about, her.

Online Exhibit
Lois Lilley Howe was one of America’s first woman architects, a lifelong Cantabrigian with deep ties to her community, and an active member of the Cambridge Historical Society well into her eighties. In this online exhibit, we explore her life, her career, her unwavering support of fellow women architects, and the long-lasting impact her architectural designs have had on the built environment of Cambridge.

Special thanks to volunteer Mike Grasso for creating this online exhibit

Growing up in the house at number three Gray Gardens East (GGE), I was totally unaware of its architectural or historical significance. Many years later, through a series of circumstances, I came to reoccupy the same house. With fewer distractions than I had had as a child and teenager, I inquired of my GGE neighbors Beryl and Ralph Beatley about the history of the house and the neighborhood. Suddenly, in their knowledgeable and articulate answers, a new world of Cambridge history opened for me.

Almost immediately, my curiosity was aroused as to the background of this unassuming woman who ignored the advice of her parents, friends, vicar and teachers, to achieve a goal which had been denied women in America up to that time.

In Her Own Words: LLH’s Reflections on Cambridge

Through Her Eyes: Photos By LLH

Our Lois Lilley Howe Photographic Collection contains almost 300 glass photographic negatives taken, with only a few known exceptions, by LLH between 1892 and 1912, and approximately 100 photographs either created or collected by LLH. The subject matter ranges from architectural features to landscapes to portraits of friends and family, and is often artistic in nature.