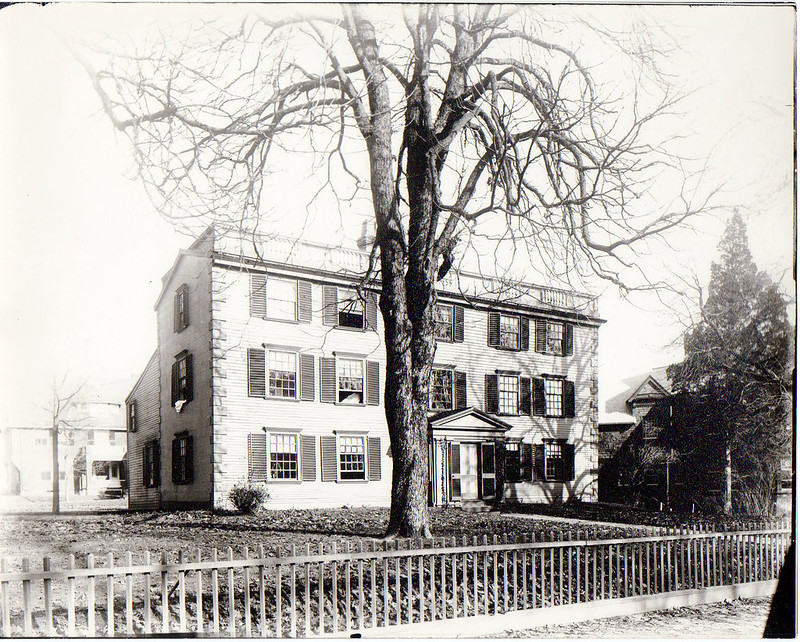 In July 2019, the Cambridge Historical Society formed a task force to examine the Society’s institutional history and make recommendations about how to confront the organization’s white privilege going forward.

One of the first steps was to research the history of the Hooper-Lee-Nichols House (HLN) (currently the Society’s headquarters) and its owners. Did the owners of the HLN own slaves? Did enslaved people live at the HLN? Through primary and secondary research, Councilor Heli Meltsner and Archivist Maggie Hoffman identified these key takeaways:

The below report on the HLN House has been approved by the Society’s Governing Council. In preparing this report, we have relied on the research done by Susan Maycock and Charles Sullivan in their excellent book, Building Old Cambridge:  Architecture and Development. While the focus of this report is on enslaved persons who may have lived at the Hooper-Lee-Nichols House, additional information on the house’s architectural history also may be found in Rediscovering the Hooper-Lee-Nichols House, published by the Cambridge Historical Society (2010).

Historic sources tell us that Massachusetts was a center of slave trading in New England from the beginning of Colonial times. The institution of slavery became legal in Massachusetts in 1641 and, as early as 1688, African men, women, and children were kidnapped by Massachusetts ship owners and traders to be transported and sold as slaves in the new American colonies or on Caribbean plantations. Because Massachusetts soil, weather, and landowning patterns were not viable for large agrarian properties, most were sold to work on Caribbean sugar plantations. Those who were sold to New England colonies, including Massachusetts, became servants or worked on small farms.

A census taken in the state in 1754 found 55 enslaved people in Cambridge: 33 men and 22 women. Boston had far more, 646 men and 342 women, while Watertown, where the Hooper-Lee-Nichols House was located until 1754 when its borders with Cambridge changed, had 7 men and 5 women.

The institution of slavery was abolished by case law in 1783 based on the Massachusetts Constitution of 1780. 1 Although the institution soon afterwards began to die out, it took years for slavery in the state to cease: a person was sold at public auction in Cambridge in 1793.

Brief History of the Hooper-Lee-Nichols House and Enslaved People

The history of the house begins with Richard and Elizabeth Hooper, who bought an 11-acre farm from John Holmes in 1684 and built a 2½ story house.  Richard died in 1690, leaving Elizabeth with two young children. By the time Elizabeth died in 1701, she was destitute, and the house had fallen into disrepair.  It stood vacant until 1716 when her son, Henry Hooper, reclaimed the property and undertook significant repairs, additions, and alterations.  In 1733, Henry sold the house to Cornelius Waldo, the first slave owner who lived in the house.

Waldo was born 1684 in Dunstable, Massachusetts, and married Faith Savage about 1710 when she was pregnant with their first child. It is unknown whether Cornelius and his family ever lived in the house, although his son Daniel (1724-1808) left his signature on an upstairs windowpane, unfortunately broken and replaced. Waldo’s principal residence was in Boston, where he was appointed to many civic roles, and it was possible that he took up residence in Watertown between these appointments.

We do know that Waldo used the house on what is now Brattle Street as a country estate and rental property. He added a third story to the house, and set out to bring the house up to date as a gentleman’s residence, probably first for himself and, after his son graduated from Harvard, for rent to fashionable Tories.  In 1742, he placed an ad in The Boston News Letter, offering to lease the back part of the house “to a good Husbandman” and the front part of the house with “Gardens and other Accommodations, to a Gentleman for a Country Seat.”2

It was Waldo who altered the house to reflect the increasingly wealthy and Loyalist neighborhood. Several of Waldo’s Cambridge neighbors owned plantations worked by enslaved people; they also kept enslaved people as house servants on their Brattle Street estates. Henry Vassall, for example, enslaved five people, and his brother John enslaved eight.

Waldo was a merchant, distiller, warehouse owner, and extensive landowner. In 1734 he entered a partnership with his cousin, Samuel Waldo, a slave-trader; however, Cornelius does not seem to have been an owner or co-owner of Samuel’s slave trading ship “Africa,” an allegation attributed to a mistake by a historian in the 1940s.3

We have three direct references to Cornelius’ slave ownership; two of these are recorded in his ledger books and reproduced online by a vendor of antique documents. In 1728 Cornelius noted payments made during travel to Worcester with his wife and “my Negro man Cesar to attend us.”  On February 22, 1742, his ledger shows “a bond for the sale of a Negro Boy named Prince to Daniel Rea, Taylor (tailor.)” Cornelius inserted the word “named” above his text, possibly as an afterthought. Further details show Rea paid 130 pounds and that Prince was then in Rea’s possession. Cornelius warranted the “Boy to him from the Demands of any Person or Persons whatsoever.”

The third reference to his slave ownership occurred after Cornelius’s death in 1753. The probate document for his estate stated that he owned “one ‘Negro Woman’ probably a slave, who was valued at 200 pounds.”4  This amount was half the price of his house and land in Boston.

We have no direct evidence that an enslaved person ever lived in the house from 1733 until it was sold in 1758. But it was of course entirely possible.

In 1758, Faith Waldo, Cornelius’s widow, sold the house to Joseph Lee.  The son of a Salem ship builder, Lee attended Harvard, graduating in 1729, but proved a “disorderly” student. He gained a law degree from the institution in 1732. A merchant and large speculator in land, he increased his social standing by marrying Rebecca Phips, the daughter of the Massachusetts Bay Colony’s Lieutenant Governor, Spencer Phips. Three years after the marriage the couple bought the house to live among several of her socially prominent and wealthy relatives who resided on Brattle Street.

Lee was thought to be a gentleman, respected by his peers, honorable, honest, and a good friend. He was a founder of the Loyalist Christ Church, Cambridge, gave parties for his neighbors and was an avid gardener on his extensive farm with its many outbuildings. About his outlook on slavery we have a glimpse from a letter a friend wrote to him from St. Johns, probably from a slave-worked plantation: “I remember an opinion you once sported – that Negros seems to be intended for Slaves, from their rank in the Scale of being – I combatted that Opinion then, but I adopt it now. I believe the Maker of all never intended Indians, Negroes or Monkeys, for Civilization.”5

Lee was chosen to fill several civic roles: a Boston constable (but did not serve); an auditor of the Treasurer’s accounts in 1721 and 1730; a member of two semi-political committees and a Justice of the Peace 1743-1744. He became a special justice of the Court of Common Pleas in 1764, a regular justice in 1769 and rose to be a special justice of the Superior Court of Judicature. He was elected to the General Court, or legislature, in 1764.

In 1774 Lee accepted a royal appointment to the much-hated Mandamus Council, a measure taken as one of the Intolerable Acts, which replaced a legislative and executive body elected by Massachusetts Bay Colony citizens. In response, a mob of Cambridge citizens rose against Lee and intended to invade his house, but relented after being offered liquor at a neighbor’s house if they did not. Lee resigned from the Mandamus Council and fled to British-controlled Boston. Perhaps due to his resigning from the Mandamus Council, his house was neither seized nor occupied by the Cambridge Committee of Correspondence, as were others of the neighborhood’s Loyalists. When the British retreated from Cambridge in 1776, Lee returned to his Brattle Street house with its pleasant gardens and view of the Charles River.

Upon Judge Lee’s death in 1802, he left an annuity to Caesar, an enslaved man whom he inherited from his father. Lee also appears to have owned a man named Mark Lee, also known as Mark Lewis, who may have been freed when slavery was abolished in 1783. Mark married Juno and was able to regularly acquire, sell, and rent land. He purchased a house and farmed one-quarter of an acre near Sparks Street in 1786 on the top of the hill that distinguishes the street. Making three more land purchases by 1792, the couple sold nine acres to local landowner Andrew Craigie in 1792 and moved to a farm Judge Lee owned in Sherborn, Massachusetts. In 1798, the couple returned to Cambridge and were taxed for a house, barn, and a small amount of tillage: the following year they rented twenty-nine acres of mowing, tillage, and pasture from Craigie. Lewis continued to farm this Cambridge land until his death in 1808.6

We know more about the people Lee enslaved than the nameless woman owned by Waldo or Cesar and the boy Prince. We do not even know if any of them lived in the HLN house. We know that Mark Lee/Lewis, on the other hand, was financially independent, acted to acquire and rent real estate, married and farmed, although this was probably after he was freed. But there is much we do not know about Mark: the quality of his life under slavery and as a free man were never recorded.

Histories like these—often vague and missing so many details—are upsettingly common. They result from centuries of racism and inequality, which not only threatened Black lives, but even evidence of those lives. So many details of the histories of enslaved people in the United States must be pulled from bills of sale, property listings, and wills. In most cases, their lives were not recorded to the degree that their enslavers’ lives were. What’s more, records that do exist have long been disregarded by white academics and cultural heritage professionals. While we are missing the name and stories of the woman who Waldo enslaved, we know that her life has value still today, just as it did in 1753.

These omissions are tied to the anti-racism work we have ahead of us.  As a cultural heritage organization charged with the responsibility of contributing to the historical record, it is critical that we acknowledge what we do and do not know about our own history, and why. Carrying out our mission requires that we think critically about Cambridge’s past, including our organizational history and the history of our headquarters, the Hooper-Lee-Nichols House.

Lincoln, Waldo. Genealogy of the Waldo Family: A Record of Descendants of Cornelius Waldo.  Vol. 1. Worcester, 1902.

Massachusetts Secretary of State. From Slavery to Freedom: African-Americans and Maritime History.