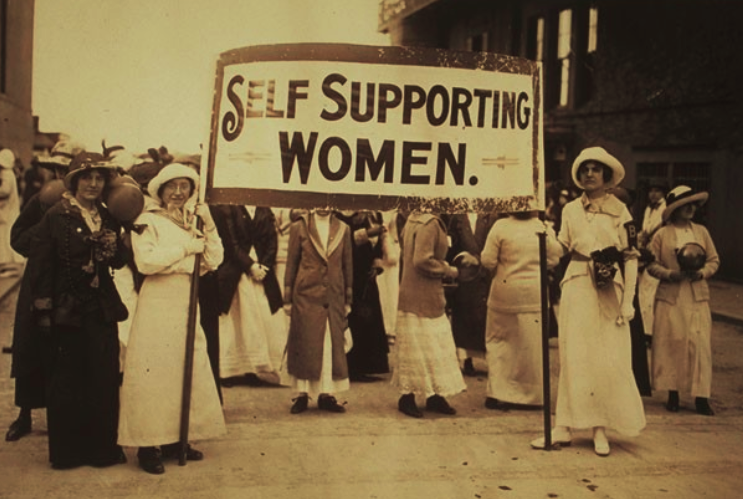 As we approach the 100th anniversary of the passage of the 19th Amendment next month, many of us have been mesmerized recently watching the American Experience production of “The Vote” on PBS. The movie tells the dramatic story the decades-long campaign waged by American women to win the right to vote. Historian and Cantabrigian Susan Ware, who served as an advisor to the movie, has been reflecting on the first graduate paper she wrote at Harvard on the Cambridge suffrage group, the Cambridge Political Equality Association. She was kind enough to share her thoughts on how her perspective has evolved since she wrote the paper in 1972, and we are delighted to share them with you here.

Want to learn more about the fight for women’s suffrage? Check out Dr. Ware’s recent book: Why They Marched: Untold Stories of the Women Who Fought for the Right to Vote

When I enrolled in history graduate school at Harvard in September 1972, I was a recent convert to feminism, full of outrage at women’s treatment in society and determined to find the real story of women which had been left out of history textbooks. As I cast about for a research topic for Professor Frank Freidel’s American Political History graduate seminar, I gravitated towards the resources of the Schlesinger Library at Radcliffe, which I had already sampled while writing my senior thesis at Wellesley. For my first paper at Harvard, I chose as my subject the Cambridge Political Equality Association (CPEA), the local women’s suffrage group. Little did I know that almost fifty years later, now an established senior scholar in the thriving field of women’s history, I would return to suffrage history in anticipation of the centennial of the passage of the Nineteenth Amendment in 1920.  Revisiting this research offers a chance for me to reflect not just on the history of women’s suffrage but my own personal stake in this larger story.

I titled my seminar paper “A Social Cup of Tea,” a somewhat condescending reference to a phrase often found in the group’s minutes to describe the social hour at the conclusion of their business meetings. That condescending tone is evident throughout the paper, where I tend to dismiss the members of the Cambridge Political Equality Association as self-satisfied West Cambridge matrons who had no inclination to ask deeper questions about women’s unequal status in American society. At least I recognized that their participation in the suffrage movement gave them an opportunity to broaden their lives beyond their homes and families, but the tone of the paper suggests that I, an impatient twenty-something feminist, wanted them to have done more, much more. Revisiting the paper almost fifty years later, I have a different reaction: a strong appreciation of the talent and organizational skills they brought to the fight and a better understanding of how well Cambridge fit into the larger national story.  Here’s what I would call it now: “In the Room Where It Happened: The Importance of Local Activism to the Women’s Suffrage Movement.”

The Cambridge Political Equality Association was founded in 1896 “to extend study and discussion with a view to securing political equality for American citizens.” While its original purview included black suffrage and proportional representation, by 1901 it had gravitated toward women’s suffrage, affiliating with the Massachusetts Woman Suffrage Association.   Between 1901 and 1911, a period which coexisted with the “doldrums” of the suffrage movement, the CPEA concentrated on school suffrage and municipal reform. Paralleling the quickening in the national movement, in the 1910s the group took on more active political work, especially in preparation for the November 1915 Massachusetts referendum on women’s suffrage. In 1916 the CPEA was reorganized as a representative district of the Massachusetts Woman Suffrage Association and in 1920 it transitioned into the Cambridge League of Women Voters, which is still in existence today.

A window on the organization and its priorities is found by looking at its membership, which was composed almost entirely of West Cambridge residents, many of them married to Harvard professors or other professional men. These women, generally in their thirties and forties, had often received the benefits of higher education before settling down to marriage and raising families. They participated in a range of activities besides women’s suffrage, including mother’s discussion groups, playground committees and vacation schools, as well as the Public School Association and the Association of Charities, but primarily on the local level. They were both seasoned local activists and women who were becoming politically active for the first time. Approximately 15 percent of CPEA membership was male, but the organization was led by women.

The most dynamic and prominent member was Grace Allen Johnson (1871-1952), who served as its president in its heyday of 1910-1916. Born in Maples, Indiana to parents with deep New England roots, she received a Library Science degree from the Pratt Institute in 1891. After marrying Lewis Jerome Johnson, the couple moved to Cambridge in 1894 when he joined the faculty of the engineering department at Harvard. The mother of two children, Johnson did not become interested in women’s suffrage until 1907 when she attended a suffragist meeting in Cambridge, England while traveling with her family. The next year she joined the CPEA. While Johnson’s elite social background was typical of many CPEA members, she was one of the few members to graduate to state and national suffrage activism, becoming the Congressional Chairman for the Massachusetts Woman Suffrage Association in 1915 and later playing major roles in the League of Women Voters and the League of Nations Association.

In my paper I laid out the arguments that CPEA members deployed in support of suffrage, drawn from the pamphlets and fliers found in their papers at the Schlesinger Library. These focused less on fairness and equity, and more on how women could use their votes to protect their homes and improve their communities. Noticeably absent from my paper was any discussion of the arguments of the anti-suffrage movement, except for a passing reference to Cambridge as a “remonstrant [anti] stronghold.” This was an especially glaring omission when faced with the results of the 1915 Massachusetts referendum to which the CPEA devoted so much organizational effort –only to see Cambridge residents vote 2-1 against it.

My Harvard professor gave me an “A” on my paper, but I think I would have graded it a B+. Strong archival research, clearly told story, but without really taking the women’s activism as seriously as it deserved. Further demerits for not talking about the anti-suffrage movement and ignoring the issue of race entirely. Every time I wrote “women,” I was talking about white women, failing to explore their lack of connections to Cambridge’s African American community.

Then again, maybe I shouldn’t be so hard on myself. Here I am, almost fifty years later, still engaged by the history of women’s suffrage and taking an active role in events around the country marking the centennial of the Nineteenth Amendment. In many ways I have come full circle.

Susan Ware is the Honorary Women’s Suffrage Centennial Historian at the Schlesinger Library on the History of Women in America at the Radcliffe Institute for Advanced Study, Harvard University.  She is the author of Why They Marched: Untold Stories of the Women Who Fought for the Right to Vote (Belknap Press, 2019) and American Women’s Suffrage: Voices from the Long Struggle for the Vote, 1776-1965 (Library of America, 2020).  A longtime Cambridge resident, she often walks or jogs through the neighborhoods where the members of the Cambridge Political Equality Association lived.