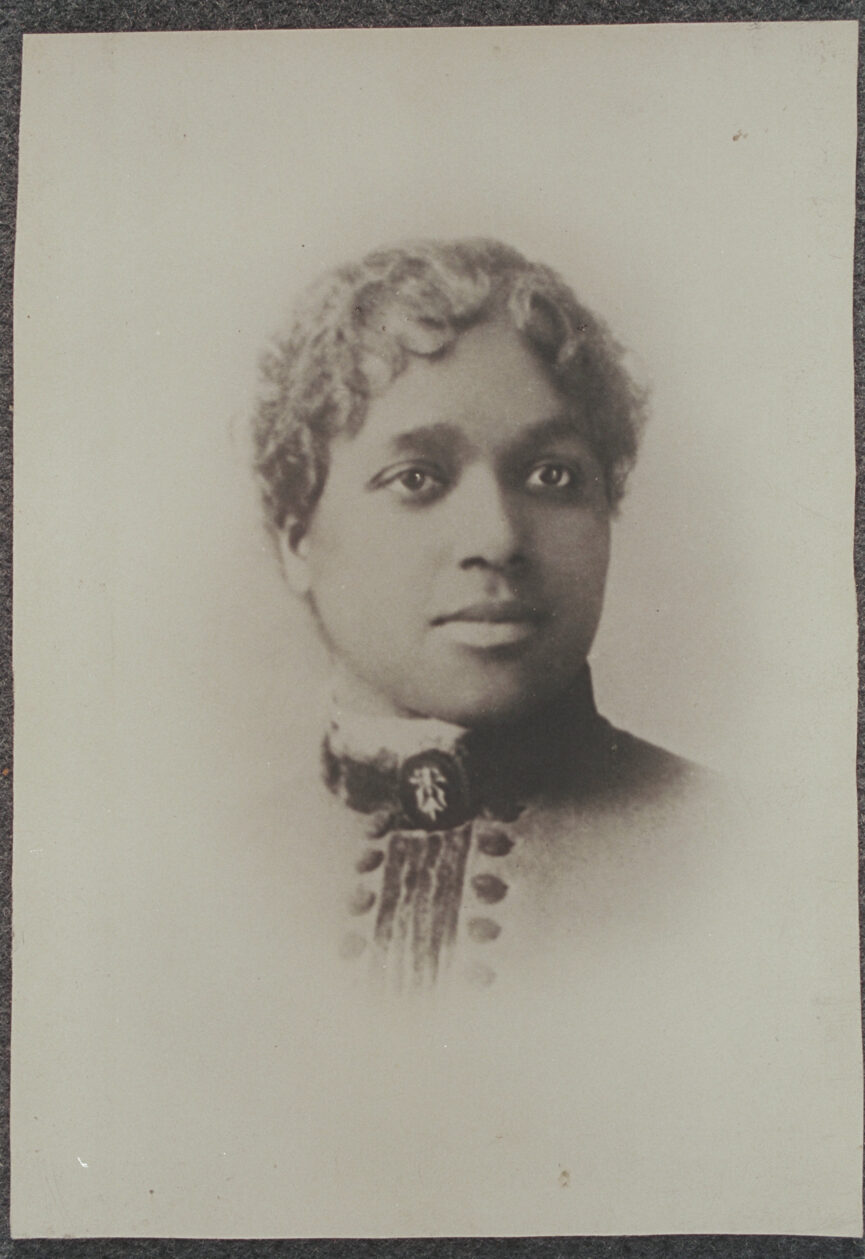 In her 1905 report to the parents of ten-year-old Edward Cummings, his principal Maria Baldwin described him as “a most loveable little boy, and we are glad that he is part of our little community.”[1] Nearly six decades later, when that little boy had become the celebrated American poet e.e. cummings, he reflected on Baldwin’s influence on his early life, calling her “blessed with a delicious voice, charming manners, and a deep understanding of children,” and remarking that “[f]rom her I marvellingly learned that the truest power is gentleness.”[2] Dedication to her profession, and most notably to her students, was Baldwin’s hallmark, and became her legacy at the Agassiz School in Cambridge where she served first as teacher and then as principal over the course of a 40-year career.

Born in Cambridge in 1856 to Peter and Mary Baldwin, Maria [pronounced “Mariah”] Baldwin was an infant when her parents purchased a house in the city’s racially and ethnically diverse Cambridgeport neighborhood. An 1855 law had codified the already widespread practice of racial integration in Massachusetts public schools, and Baldwin attended the Sargent Primary and Allston Grammar schools alongside her white peers. In reality, the fact that only about 1% of Cambridge’s population was Black meant that nearly all of Baldwin’s schoolmates were white.[3] After graduating from Cambridge High School in 1874, Baldwin entered the city’s teacher training program and received her teaching certificate in 1875, followed the next year by her sister Alice. Both of the Baldwin sisters were unable to secure teaching jobs, however, and following their father’s death in 1880, Maria travelled to the Eastern Shore of Maryland to teach at a segregated school for Black students in order to support her mother and younger siblings. Returning to Cambridge in 1881, Baldwin was able (due to increasing pressure from the city’s Black community) to at last secure a full-time teaching position at the Agassiz School, making her the only Black teacher in Cambridge.

Although schools in Cambridge were desegregated in theory, their status as district-based meant that each school was attended by the children living in its neighborhood; segregated living areas were therefore reflected in the racial, ethnic and socioeconomic makeup of the schools. Because it was in a predominantly white, middle-class area of a predominantly white city, the Agassiz school was attended by an almost universally white student population during Baldwin’s time there. In 1889, after eight years of teaching in the lower grades of the Agassiz, Baldwin was recommended by the retiring principal to be her replacement. Baldwin at first roundly rejected this offer, stating that “[i]f I failed in the position you mention it would be a conspicuous failure.”[4] Baldwin clearly recognized the implications of her assuming the role of principal as a Black woman, and understood that her performance would be judged not on its own merits but as the success or failure of her entire race. At a time when she was still the only teacher of color in the city, her ascent to principalship and its attendant public scrutiny was more than she felt capable of taking on. But she eventually allowed herself to be persuaded by her predecessor and by the Cambridge superintendent of schools, and moved from being one of the most beloved teachers at the school to its beloved principal. In both of these roles, Baldwin was remembered by students and colleagues for her quiet authority, her love of literature and poetry, and her affection for and nurturing of her pupils.

In addition to her professional dedication, Baldwin was also active in the social reform movements of the late-nineteenth and early-twentieth centuries. As a member of the Boston and Cambridge area Black elites, sometimes referred to as the Other Brahmins, Baldwin found herself in the precarious position of needing to appeal to both white elites and Black reformers. Thus Baldwin needed to present herself in such a way that her accomplishments and her immersion in the world of white Cambridge education (including oversight of both white students and their white teachers) reinforced white Cantabrigians’ sense of their own progressive color-blindness. But she also wanted and felt compelled to support causes important to her Black peers, including universal male suffrage and the desegregation of government and public accommodations. Tipping the scales too far one way or the other – either immersing herself too deeply into the white world of the Cambridge schools or speaking out too strongly on a controversial racial issue – would destroy the delicate balance that Baldwin had been able to create for herself, allowing her to live with a foot in each world.

Despite the need to maintain this balance, however, we can clearly see that Baldwin’s commitment to potentially controversial racial causes increased as she aged; this shift was also a reflection of the increasing militancy of Black activism as the nineteenth century gave way to the twentieth. Whereas the 1890s saw Baldwin devoting most of her out-of-school time to groups like the Woman’s Era Club, which emphasized Black women’s involvement in reforms that would benefit women of all races and nationalities, by the turn of the century she was speaking out against imperialism as it was manifesting itself in the Spanish American War. By 1909 she was appointed to the Negro National Committee, and in 1910 she became a representative to the Boston branch of the NAACP – the largest and most active of the Association’s regional branches in the 1910s. Baldwin continued to dedicate herself to racial justice until her death in 1922, aiding Black mothers and children in settlement houses, urging the desegregation of the military during and after World War I, and advocating for increased educational opportunities for young Black girls in the Cambridge area and beyond.

It is no wonder, then, that when a student’s efforts to rename the Agassiz School took hold in 2002, the Cambridge community looked to Maria Baldwin as a suitable namesake. Originally named after Louis Agassiz, the Swiss-born Harvard professor, Cantabrigians had been increasingly uncomfortable with a school bearing the name of a man whose work in the racially-charged pseudo-science of polygenism (the theory that race is a biological construction, and that the different races stem from different origins and possess a hierarchical set of characteristics). Agassiz eighth-grader Nathaniel Vogel had seen a plaque at the school dedicated to Baldwin and, after reading more about her accomplishments, successfully lobbied for the school to be named in her honor. This change thrust Baldwin’s life into the local spotlight, but she remains a lesser-known figure outside of the Cambridge area. As a member of a formidable group of Black activists on both the local and national scale, and as an educator and reformer in her own right, Baldwin’s story deserves a broader audience and a recognition of all she was able to accomplish while working within the gender and racial confines of Gilded Age America.

Learn more about Maria Baldwin in this sister post, Maria Baldwin, 1856-1922: “An Honor and a Glory,” on our Did You Know? blog. We also recommend reading Maria Baldwin’s Worlds: A Story of Black New England and the Fight for Racial Justice.