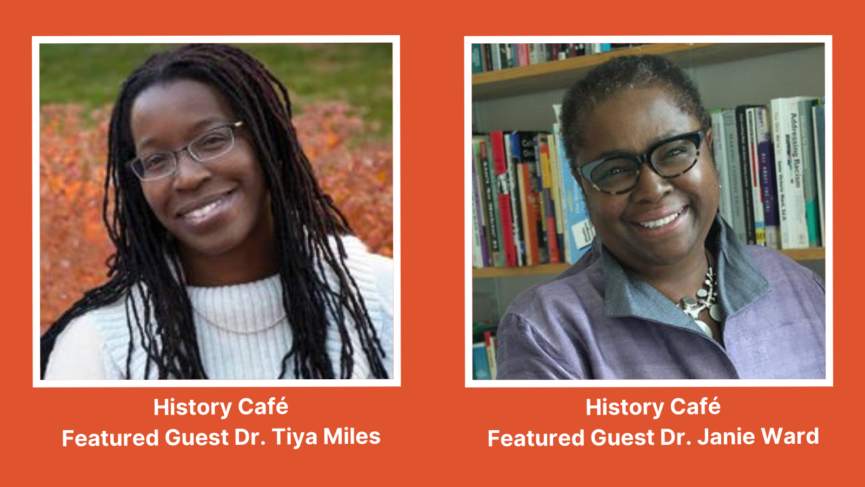 This spring, thanks to the generous support of the Massachusetts Society of the Cincinnati and a grant from the Bridge Street Fund, a special initiative of Mass Humanities, History Cambridge was able to host two History Cafés exploring the rich history of the city’s Black community. Graduate intern Eshe Sherley created our Early Black Cambridge History Hub, a compilation of resources for those seeking information about early Black Cantabrigians, and she also invited two preeminent scholars to share their work with us through these programs. The first History Café, held on May 21, featured Dr. Tiya Miles, Radcliffe Alumnae Professor of History at Harvard University. Dr. Miles recently piloted a new course titled “Abolitionist Women and their Worlds,” which featured Cambridge resident Harriet Jacobs, who ran boarding houses in the city and and was part of a network of Cambridge women working for the abolition of slavery and equal social, political and economic rights for Black Americans.  This program featured Dr. Miles in conversation with several of her students as they discussed their work on Cambridge’s women abolitionists and the place that Jacobs occupied at its center.

Our second History Café, held on June 9, was a conversation with Dr. Janie Ward, Professor of Education and Director of the Critical Race, Gender and Cultural Studies Institute at Simmons University. This History Café built on our previous program on Harriet Jacobs and the world of Cambridge’s abolitionist women, tracing the threads of the Black experience through the eighteenth, nineteenth, and twentieth centuries. We explored the ways in which the Black community flourished in the decades after independence, as well as the challenges it has faced from socioeconomic, political and geographical racism. Dr. Ward has completed extensive research on the history of her own Cambridge residence, uncovering a fascinating web of racial, ethnic and socioeconomic factors that have influenced the makeup of her neighborhood and others in Cambridge over the past three centuries. Her work helped us unpack the complex array of factors that have led to the creation and recreation of the city’s neighborhoods, and allows us to better understand the connections between Black Cambridge past and present.