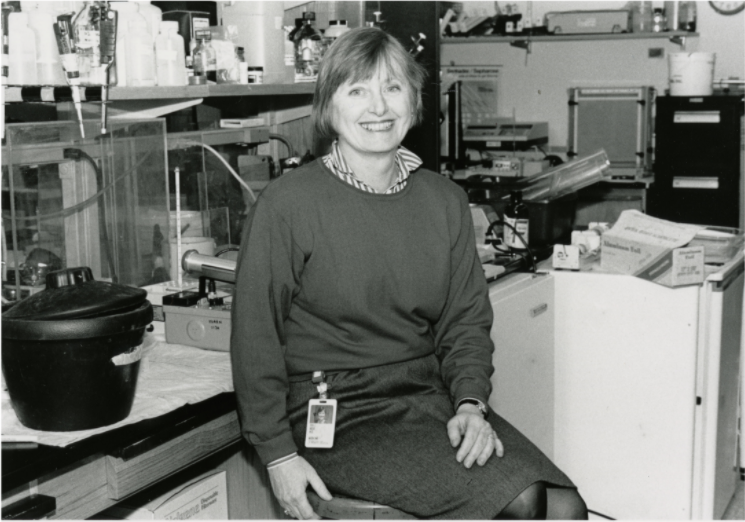 In 1978, my husband and I moved to Brewster Village – an 1880s “development” of Queen Anne Victorians off Brattle Street. We soon began to meet our new neighbors. In our first six months, we were invited to not one, but two, celebrations to mark a neighbor’s first 50 years on Brewster Street. Gatherings in honor of significant life events knit the neighborhood into a “village” – a word chosen with consideration by Robert Frost who lived at 35 Brewster Street for the last 20 years of his life. Our village is a congenial place that includes more than a few professors, along with architects, bankers, doctors, teachers, lawyers, designers (my husband) and economists (me). But with almost everyone working in different realms, conversations don’t focus on the occupational, so the work lives of neighbors tend to remain at a remove.

Our neighbors across the street – Bob and Eva Neer – were doctors, Bob an endocrinologist at MGH, and Eva, a researcher at the Brigham. In a sense, I knew them quite well as an observer of their busy comings and goings with two school-age boys. But I had no idea that Eva was engaged in biochemical research on a topic at the forefront of biochemistry, or that Eva was a rising
star in the Harvard Medical School firmament.

After her death, I learned that my neighbor Dr. Eva Julia Neer1 (née Augenblick) (1937–2000) was engaged in work as consequential as that of anyone in our neighborhood of accomplished people or indeed in any part of our city that is home to so many scholars and writers.

Born in Warsaw, Eva became a refugee before her second birthday following Hitler’s 1939 invasion of Poland. As intellectuals, her parents (father a prominent lawyer and mother a Sorbonne-educated scholar) were in danger of being rounded up and killed by the Nazi regime. The family fled (via Latvia and Sweden) to Switzerland. Unable to stay in the safety of that mountain fortress country, the family of three made a perilous journey to Lisbon and across the Atlantic to Brazil.

The Augenblicks remained in Brazil through the war. With their educations and multiple languages, they might easily have stayed and made a comfortable life in South America, as many other European refugees chose to do. But Poland was home (Eva’s father was an lawyer advocate qualified to argue before the country’s supreme court), and they assumed that they would return to Europe after the war. Then in March 1945, the Yalta agreement made clear that their home country would be ceded to the Soviets. Eva’s parents, who had followed the radio-broadcast terror of Stalin’s show trials in the 1930s, immediately applied for visas to enter the United States.

In 1946, Eva and her parents arrived in America, where they faced a difficult period of economic adjustment. Ultimately settling in Scarsdale, they were fortunate to have the sponsorship of a friend they had known in Warsaw, virologist Hilary Koprowski, whose family had also escaped Poland for Brazil before coming to the United States.

For Eva, Dr. Koprowski was a witty and charming scientist and a model to emulate – a character out of Paul de Kruif’s classic 1926 book, Microbe Hunters. An excellent student, with a gift for forming close friendships, Eva entered Radcliffe College in 1955. During 1955 her freshman year, she met her husband-to-be, Robert Neer, a Harvard junior bound for medical school. They fell in love, and did not wish to be separated when Bob headed to Columbia after he graduated. Eva transferred to Barnard for her last two years of college, after which she also entered Columbia’s medical school.

During medical school, Eva felt the pull of lab research and had her first exposure to the field that would become her focus – protein chemistry – in a lab focused on neuromuscular diseases. Medical training then took the young couple to Washington, D.C. – Bob to the National Institutes of Health and Eva to Georgetown as an intern. In a side venture, they became parents. In that era before maternal-paternal leave, Eva took the year off.

Still, she continued to prepare herself for a research career – taking a night course in physical chemistry. The Neers’ next training stop was Yale where Eva joined the lab of Dr. William Konigsberg, a leading scientist in protein sequencing, particularly hemoglobin. There, Eva benefited from Dr. Konigsberg’s mentorship. As importantly, she received an education in biochemistry from two extraordinarily dedicated post-docs, Klaus Weber and Donna Hart, who undoubtedly recognized Eva’s research gifts.

In 1966, the Neers moved once more – back to Cambridge. After fellowship training, Bob became an attending physician at MGH. As for Eva, Dr. Konisberg had recommended her to Harvard biochemist, Dr. Guido Guidotti, a man of enormous energy and generosity. A native of Naples, Italy, who had come to the United States as a high school exchange student, Guidotti had a passion for protein research, fascinated by the unknowns – how a protein in a seemingly fixed arrangement can be so flexible. He saw that same passion in Eva.

Sharing a lab bench with Guidotti, Eva became accustomed to the visits of Nobelists like Walter Gilbert and James Watson who regularly dropped by to chat with their entertaining Italian colleague. Guidotti’s lab was inventing novel methods to tease out proteins that normally float in the oily membrane that surrounds every cell, and purify them while preserving their function. After Eva finished her hemoglobin studies, Guidotti encouraged her to switch to membrane proteins. Eva began to focus on one called adenylate cyclase that helps transmit chemical signals across cell membranes, from outside to inside. Thus began her creative exploration of the chemical steps in the messaging process. (Another creative endeavor during this period was the birth of Eva and Bob’s second son.)

In 1976, Eva moved to Brigham and Women’s cardiology division as its sole basic scientist. Here Eva’s training and study came together in way that testifies to the truth of Louis Pasteur’s famed adage about progress in fields that require observation – “Chance only favors the prepared mind.” Eva doubled down on the identification of proteins that modulate signals between cell surface receptors and effector proteins. Soon after the identification of G-proteins in 19802 Eva discovered a new class of the proteins (Go), one of the most abundant signaling proteins in the brain.

Eva’s capacity for making friends soon led her to more advances. She began a collaboration that might have been seen as unlikely. It was with David Clapham, a electrophysiologist, who had moved to a lab across the hall from hers. Though they were in different fields, both were interested in understanding heart function. In 1985, they joined forces, Clapham bringing his interest in ion channels and Eva hers in G proteins.

Working with individual cell membranes, the pair made a discovery that went against conventional thinking. They found that a G-protein subunit (Gβγ) – thought to have a role limited to buffering an active messaging unit (Gα) – was just as active. It was a controversial finding, quickly disputed by a group of senior researchers in Texas who insisted on their contradictory data.

Over some years of controversy, Eva and David Clapham defended their case with data, despite the brickbats tossed in their direction. Such composure is not always the case in scientific disputes. But ultimately, Eva and Clapham were proved correct, burnishing Eva’s reputation both as a scientist and a model of grace.

In 1990, Eva was promoted to full professor at Harvard Medical School, only the second woman to attain this rank in the history of the school’s largest department, Medicine. Highly competitive at winning federal research grants, she was known as a superb teacher. Eva believed that if one could not explain one’s research to others, one did not fully understand that research. She was known for her clarity and ability to illuminate complex material, sometimes by calling upon erudite references from art and literature.

Eva was also known as a mentor to undergraduates, doctoral students, and young scientists. She was sensitive to issues facing women, and advocated for policies that would remove impediments to advancement in academic medicine.

Eva received many honors, including coveted awards from the NIH, the American Heart Association, and the Federation of American Societies for Experimental Biology. She was elected into the American Academy of Arts and Sciences and the National Academy of Sciences, and the Institute of Medicine (now called the National Academy of Medicine). After Eva’s death, Harvard Medical School named an annual keynote address in her honor.

To me, the most poignant of Eva’s honors was her election to the Polish Institute of Sciences and Arts in America, her nomination initiated by Hilary Koprowski, the virologist who had so influenced the young Eva’s determination to pursue a life in science. Multilingual like her parents, she gave her acceptance speech in Polish.

Eva died in February 2000, at the age 62, eleven years after a diagnosis of breast cancer. Eva did not share her illness with neighbors or even with colleagues in the lab. Indeed, she went into the lab until just three days before her death.

Several months before her death, Eva and I went together to a memorial service for an older and beloved Brewster Village neighbor. Walking home, I noticed that Eva was unusually somber.

Now, when I think of that day, I can still visualize the Eva with bright blue eyes, short blond hair, and slender figure, who seemed not to age during our years as neighbors. But I also think of how little I knew of her work.

So with the Cambridge Historical Society’s call for profiles of Cambridge women, it gives me pleasure to share this glimpse of a passionate scientist who was my neighbor. Eva Neer’s contribution to the world was great. Her research on G-proteins – her constant focus – advanced not only basic cience, but contributed to practical applications in designing prescription drugs that have benefited countless lives. (Some 60 percent of marketed prescription drugs work through G-proteins.)

I have not tried to describe Eva’s work in its technical terms. For that description, I direct readers to Harvard Medical School’s Memorial Minute, and to a remembrance in the journal Cell by her collaborator and friend, David Clapman.

*A graduate of Wellesley College, Annette LaMond has a S.M.  from the MIT Sloan School of Management and a Ph.D. in economics from Yale University. She is an author, editor, and consultant, whose research has ranged from industry regulation to Cambridge history. She contributed an essay to the Cambridge Historical Society’s centennial book about a fierce controversy between the Cambridge Plant Club and a garden club in Georgia. An avid skater, she wrote a history of the Cambridge Skating Club – the second oldest skating club in the United States. During the non-ice season, she enjoys gardening and is a regular volunteer in the garden at the Hooper-Lee-Nichols House.