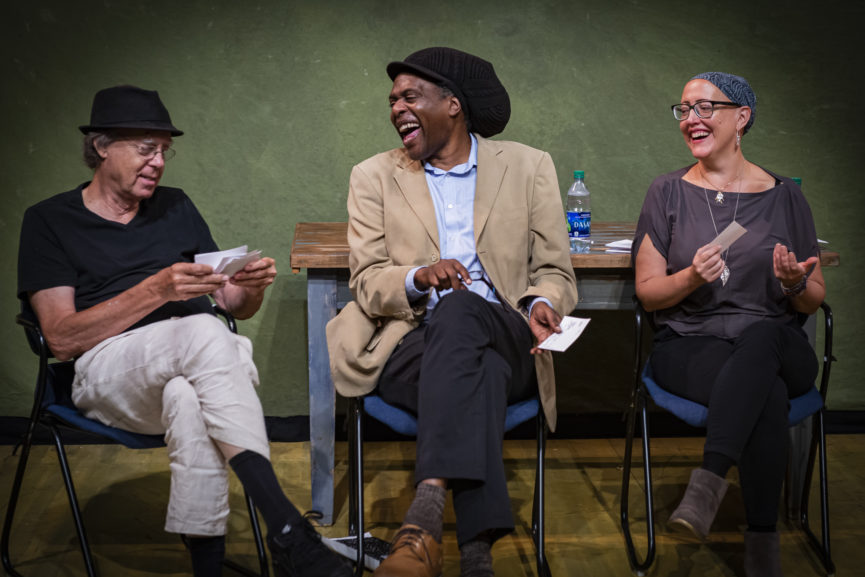 Many thanks to everyone who joined us at the Central Square Theater for our final History Café of 2019! We were delighted to hear from artists David Fichter, Eryn Johnson, and Vincent Siders on how the arts can serve as a catalyst for– or reaction to– change. Our thanks to Dr. Marty Blatt for moderating the conversation.

The evening began with Debra Wise (Artistic Director, Underground Railway Theater) and Lee Mikeska Gardner (Artistic Director, Nora Theatre Company) welcoming attendees to the Central Square Theater. Attendees had the opportunity to sit on stage as Wise and Gardner described the radical traditions fostered in this space. The theater itself emerged out of activist efforts that centered on engaging the community through addressing current political and social issues.

David Fichter described his inspirations for the murals he has painted throughout Cambridge. In The Potluck, painted in 1994, Fichter depicted many gatherings involving food and friends from the community in both religious and secular spaces.

Vincent Siders, Director of Youth Underground Theater, commented, “All kinds of people have super powers. It’s my job to figure out what kind of powers they are and how to help them as a team to work together in order to create an artistic world.”

Eryn Johnson, Executive Director, Community Art Center, focused her commentary on the importance of place. The Community Art Center, she explained, has served the Port neighborhood for several generations. She believes that the power to change society is rooted in and begins with one’s connection to a neighborhood community. But Johnson also remarked on the challenges of Cambridge’s “dual identity” that engages both the local and the international. This dynamic produces friction, making it at times difficult for community-based art initiatives to find support.

When the discussion opened for a question-and-answer session, one audience member reflected on growing up in Cambridge and how dramatically the demographic has changed. She asked “Where has everyone gone? What makes someone from Cambridge?” While we at the Cambridge Historical Society do not know the answers, we encourage all to explore our past programs that centered on these complex questions.

We concluded with a Questions Game, a signature Cambridge Historical Society activity. We distributed index cards and asked the audience to reflect on and write down answers to three questions (see below). Answers to these questions—and those from all of our events this year—will be archived at the Cambridge Historical Society, making it possible for future researchers to understand how people in Cambridge felt about these issues in 2019.

Here are some of the questions asked and the answers we received:

We express our thanks to Central Square Theater for hosting us, especially Debra Wise, Lee Mikeska Gardner, and Cassie Chapados. And we are grateful to our speakers and moderator for sharing their insights and stories of social justice and the arts. Thanks to Marissa Williams for photographing the event, and CCTV for filming.

History Café 3: Engaging through the Arts from Cambridge Community Television on Vimeo.