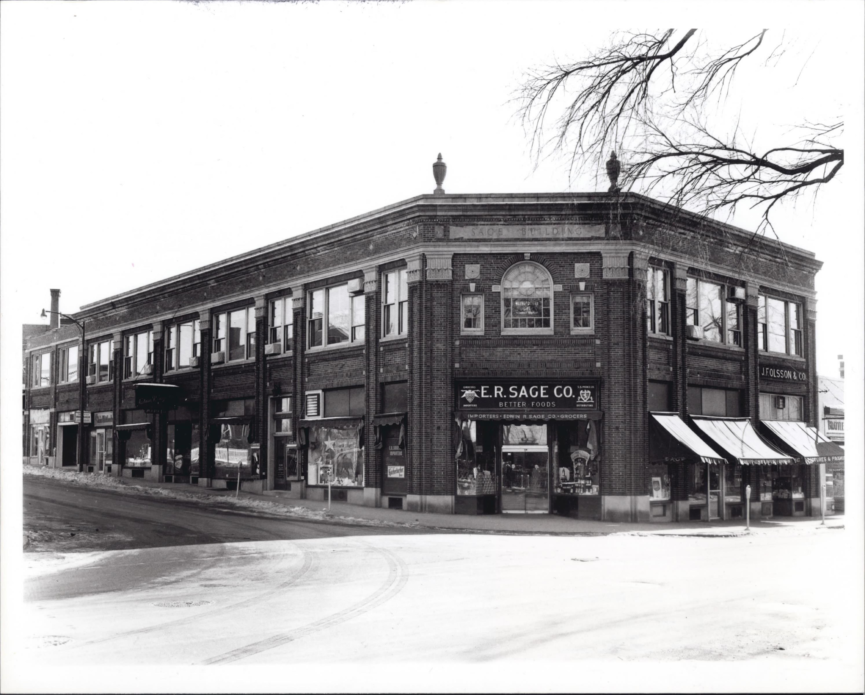 This presentation was given as part of a Cambridge Historical Society program called “Conversations on Harvard Square” at the New School of Music in Spring of 1999.

My grandfather, Rodney Sage, came to Cambridge from New Braintree, Massachusetts, in 1898. He worked for Daniel H. Dean in a small grocery store on Brattle Street. He bought the business when Mr. Dean retired.

My grandfather was quite a guy. He would get up in the morning, hitch up his wagon and go out to the local people who lived around West Cambridge, and he would jot down their order for what they wanted for groceries. He’d drive back to the store, and assemble their orders, and go back and deliver them the same day — because, of course, this was before telephones. I think he was very relieved when they developed telephones.

[Mr. Sage built the store on Church Street in 1928. His sons, Rodney and Charle’s father Edwin, worked with him in the store.] Years ago, on Church Street, there was a window which probably measured 5 feet wide by 8 or 9 feet high. Typically he had it decorated with wine, advertising, and something of that nature.

Then, I think it was during the troubles of the 1960s, he decided he couldn’t very well leave the window exposed anymore. We bricked it in, which was actually more practical, because by bricking it in it allowed us to use the space behind the window, but we lost the display window at that time.

My uncle Rodney ran the store for many years with my grandfather, who was semi-retired. In 1939 my father opened a story in Belmont, so he was out in suburbia. I remember my mother telling me that they couldn’t believe they were moving way out to Belmont. They would be so far away from Cambridge, but they eventually adjusted to it.