In 1951 one could get a full course meal there for under a dollar. In 1953, New England Frozen Foods Co. of Watertown, Massachusetts became the distributor for Simeone’s tomato and meat sauces. Very popular with Cambridge business and college students, Simeone’s served high quality food at low prices. In 1955, the restaurant underwent a $100,000 expansion and renovation, to increase its seating capacity to 385 patrons, and “provide one of the largest and newest kitchens in New England.” In 1960 the brothers purchased the White Spot Restaurant, long located at the Four Corners in Woburn, and renamed it Simeone’s White Spot. It served the same menu as the Cambridge restaurant. The White Spot closed in 1970 due to sewage problems, which drained money from the Cambridge restaurant.

In April 1964, Simeone inaugurated its Wednesday Italian Buffet Night and invited luminaries, such as Boston Patriots kicking star Gino Cappelletti, a veteran of the American Football League team, Cambridge Mayor Edward Crane, and members of the City Council and their wives. Famous visitors through the years included actor Tony Curtis and the entire cast of the “Boston Strangler” movie.

On March 28, 1976 a tragic three-alarm fire of “undetermined origin” ravaged Simeone’s. In 1977, Joe Simeone began a new career in the Cambridge Public Schools, supervising the cooking, food service, and catering operations of Enterprise Coop where high school drop-outs or potential drop-outs prepared, served food at the Teachers’ Cafeteria in the Cambridge Rindge and Latin School, and ran a sub shop. In 1981, Victor Simeone died of a heart attack at age 63 in Houston, Texas. Joe died in May 1988 at Mt. Auburn Hospital. 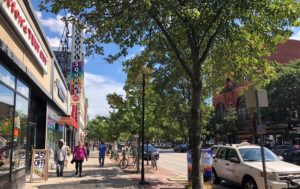