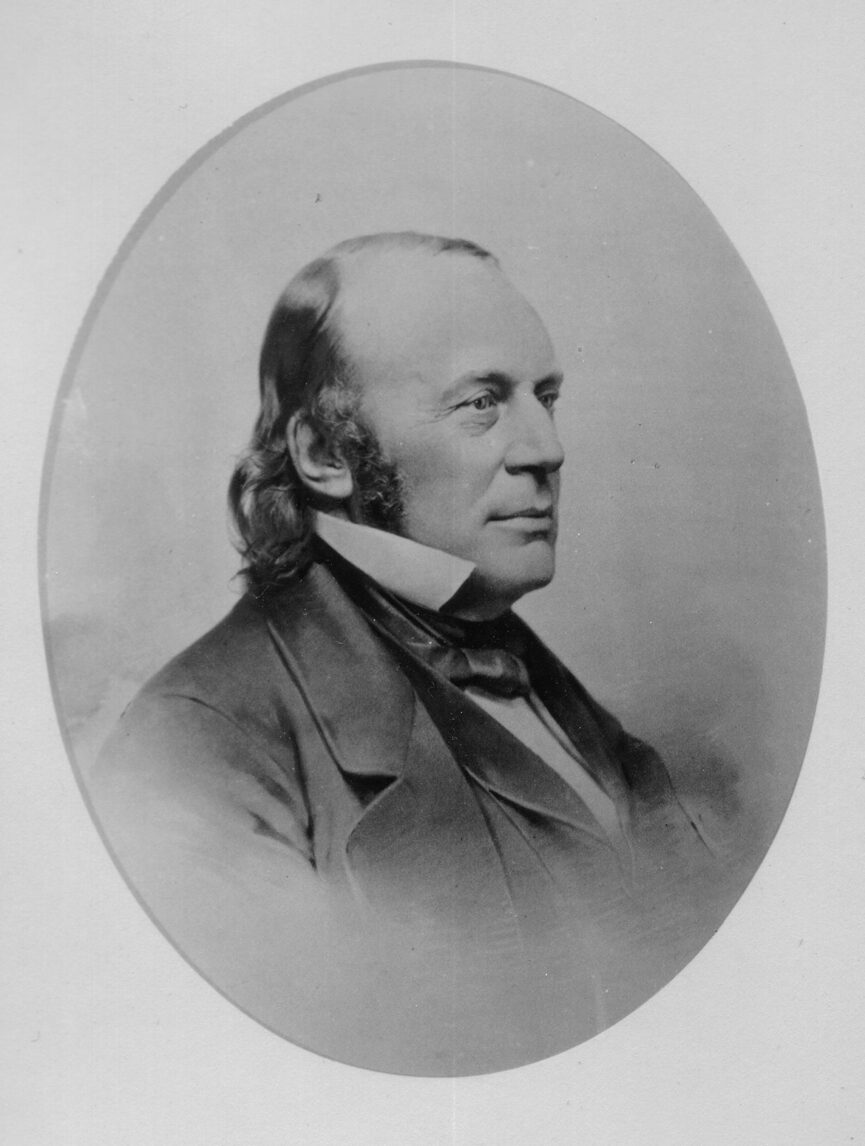 Three famous men –– Asa Gray, Louis Agassiz, and Charles Darwin –– shaped our understanding of our origin, and two of them lived in Cambridge. Gray was the eminent botanist at Harvard, classifying plants into families and monitoring their worldwide distribution. Agassiz, an animal taxonomist and founder of Harvard’s Museum of Natural History, expounded a theory that ice ages had shaped our topography. Meanwhile, Darwin was pondering how the creatures and birds he saw in the Galápagos and South America fitted together. At the outset, all three believed in creation and the fixity of species.

In the 1840s Agassiz came to Harvard from Switzerland, and Gray eagerly introduced him to the American scientific establishment.

As late as 1858, Gray accepted a sort of static, God’s-order vision of all species, but he was an empiricist, following observable evidence. Already in the 1840s, he noted in print that eastern North America and eastern Asia, especially Japan, both hosted many plants found nowhere else. Identical or closely similar species were growing a world apart.

In 2011, David Dobbs wrote an article for Wired magazine: “How Charles Darwin Seduced Asa Gray.” The puzzling similarity of plant species in our Northeast with Japan gradually drew Gray into a long correspondence with Charles Darwin, which led to Gray’s accepting Darwin’s ideas that species adapt, thereby putting him at odds with Agassiz.

According to Dobbs, this correspondence led in 1857 to Darwin’s making Gray “the third confidante to know of his theory of evolution, including his ideas on natural selection… He offered his ideas as admittedly blasphemous and doubtless flawed while making clear the key mechanism — the selection and amplification of advantageous traits through greater survival and reproductive rates of the individuals who happened to inherit them — that elevated his above previous transmutation theories.”

What truly sold Gray, in those months between Darwin’s private confession of the theory and his publication of it more fully, was the light Darwin’s theory shed on the Japan-North America pattern Gray had long been pondering. Gray solved this puzzle, as Dobbs says: “by essentially treating the two great continents as islands formerly joined. Though this seems routine in our post-plate-tectonics era, it was a big leap at the time. . . Gray connected and disconnected the two continents by using Agassiz’ Ice Age theory.”

Dobbs goes on to report that “Gray wrote…a review of Darwin’s Origin of Species in the Atlantic in July 1860, providing a pivotal victory for Darwin: It gave his highly controversial theory, which he had published the previous December, the support of one of America’s most respected scientists. Gray proved a key … advocate for Darwin in the U.S., especially during 1860, when he thrice defeated in debate America’s most prominent scientist, the zoologist Louis Agassiz. Agassiz, a creationist, resisted Darwin’s theory ferociously. He did so both because he disagreed and because he himself had become the country’s most famous scientist by beautifully articulating a vision of species as works of God. Agassiz had built his career on this vision.”

Agassiz’s attempts to refute Darwin’s ideas “proved maddeningly difficult… At the January 1860 meeting of the American Academy of Arts and Sciences, Agassiz reasserted the fixity of species by trying to refute any relationship between Tertiary-period seashell fossils and present forms — but was soundly contradicted by William Barton Rogers, a prominent geologist who was then starting the Massachusetts Institute of Technology.

“Most of Agassiz’ Harvard colleagues (as well as the Massachusetts legislature) continued to support Agassiz’ Harvard museum, and the scientific community continued to recognize the great value of his taxonomic and curatorial work. But as a theoretician, Agassiz walked alone. “As he recognized himself by writing only for the popular press, the scientific debate had moved on. His own students were questioning and deserting him. Colleagues grew less deferential… Members of the Academy of Arts and Sciences — a group that Agassiz had long dominated — began siding with Gray on political matters, and in 1863 they elected Gray president and William Rogers secretary. Gray had outmaneuvered, outvoted, and embarrassed Agassiz in the elitist political structure that he himself had founded.”

This competition has been dramatically recreated from Gray’s and Darwin’s letter exchanges, which you can stream to your computer: Go to the performance of Re:Design recorded on February 14, 2008, at the MIT Museum.