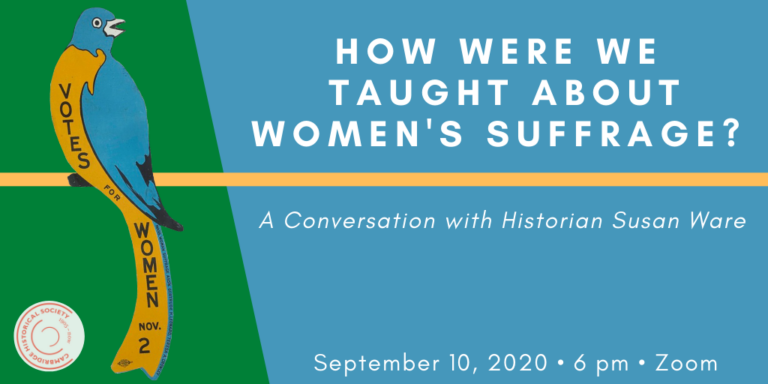 How Were We Taught About Women’s Suffrage? A Conversation with Historian Susan Ware

During this important centennial year we have had many opportunities to learn about the decades-long movement for women’s suffrage that culminated in the passage of the 19th Amendment in 1920. But how has our understanding of this complex and multilayered history been shaped by what we were taught in school? When, and in what ways, were we introduced to the study of women’s history, and how does this depend on when and where we grew up?

On September 10 we were joined by Cambridge-based historian Susan Ware for a discussion of how the experience of learning history at a women’s college shaped her career as a historian and how her understanding of the nuances of the suffrage movement has evolved over the past five decades. Dr. Ware is the author of Why They Marched: Untold Stories of the Women Who Fought for the Right to Vote, American Women’s History: A Very Short Introduction, and Letter to the World: Seven Women Who Shaped the American Century, among other books. She is Honorary Women’s Suffrage Centennial Historian at the Schlesinger Library on the History of Women in America at the Radcliffe Institute for Advanced Study, Harvard University, and General Editor of American National Biography. Her commentary is featured in The Vote, this year’s multipart PBS American Experience documentary on the suffrage movement.

We began our conversation with a discussion of what books got Ware “hooked” on women’s history. Ware described coming to what she called her feminist consciousness through literature, citing three works in particular: Betty Friedan’s The Feminine Mystique, Simone de Beauvoir’s The Second Sex, and Doris Lessing’s The Golden Notebook. As an undergraduate student, Ware took the feminist themes of these books and combined them with her interest in history to begin to uncover the stories of women whose lives were not part of the traditional historical narrative. Although she attended a women’s college during the height of the women’s movement of the late 1960s and early 1970s, Ware remembers Wellesley as a relatively conservative environment where she did not experience a surge of interest in women’s history among her professors and classmates. She did, however, choose to write her senior thesis on the Cambridge Political Equality Association, a local women’s organization working for enfranchisement during the early twentieth century.

When Ware arrived at Harvard for graduate school in the fall of 1972, she was the only female graduate student in the department of history – she credits her presence there to a designated admissions slot for alumnae of women’s colleges. Once there, however, she was able to take advantage of the enormous resources (in both material and personnel) of the Schlesinger Library on the History of Women in America, beginning a partnership that has lasted her entire career. Ware emphasized the enormous significance of a library dedicated to collecting, preserving and sharing the experiences of American women.

Delving into her most recent book, Why They Marched, Ware discussed the difficulty she faced in choosing the women and stories to tell in order both to fully represent the diversity of those involved in the suffrage movement and to provide a cohesive overview of the movement as a whole. Describing her desire to include women from a diverse array of racial, geographical and socioeconomic backgrounds, Ware noted that her book attempts to portray different strands of suffrage activism that were woven together to form a rich tapestry. Rather than viewing the different approaches of moderate feminists and their more radical counterparts, Ware sees them as complementary, with each taking actions that reinforced the other’s mission. She also revealed how rewarding it was for her to be able to revisit “old friends,” – women about whom she had already written at different points in their lives but could now examine during their suffrage years.

Audience members had many questions for Dr. Ware, including how she chose the objects featured in her book to accompany the stories of suffrage activists. Ware expressed her desire to choose everyday objects that many women would have had or encountered, and to imagine their symbolism in the struggle for enfranchisement. She discussed the example of the tin bluebird, the symbol of the Massachusetts Woman Suffrage Association, envisioning a local woman’s decision about whether to post the sign on her door or in her window to declare her support for suffrage. Ware emphasized the value of material objects, both to those who owned and used them and to historians as a way of accessing their stories.

The final part of our conversation centered on the ways in which traditional accounts of the suffrage movement have fallen short by omitting the stories of a wide variety of women, particularly women of color. Ware discussed the importance of reintegrating these marginalized groups back into the narrative in order to paint a more complete picture of the movement’s goals and strategies. In particular, she discussed the experiences of Black women; many were pushed to the side or excluded outright by white women activists, but during the years just before and after the Civil War many made the deliberate choice to support enfranchisement for Black men rather than for all women because they felt compelled to choose their racial over their gender identity. Ware is optimistic about what she sees as an increased recognition of intersectionality and its crucial role in the study of women’s suffrage and other social and political movements. Her advice to young historians just starting out in the field is to keep searching for new stories and new perspectives, and to surround themselves with peers and mentors who are on the same journey of discovery.