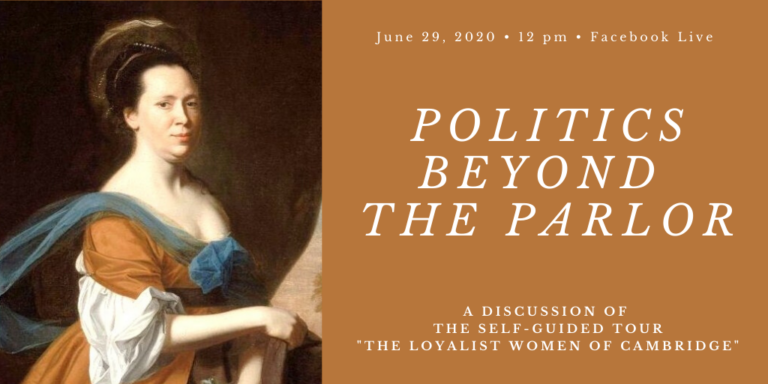 Event Recap: Politics Beyond the Parlor

On Monday, June 29, CHS held a Facebook Live event entitled “Politics Beyond the Parlor: The Loyalist Women of Cambridge.” During this event our spring semester intern, MaryKate Smolenski, spoke about the self-guided tour she created, explaining her research process and detailing her findings. MaryKate spoke about the original (pre-pandemic) intention for this event to be a History Café which she would moderate, and detailed the transition in both her research and the decision to create a self-guided tour. She explained the difficulties of assigning political beliefs or affiliations to women, as they did not have the right to vote and their legal identities were “covered” under those of their husbands or fathers. Many women were deemed Loyalists because their husbands or male family members were considered loyal, even though we have no firsthand knowledge of their own political leanings. Some women, however, were active in showing their support for the Loyalist cause through a variety of activities including letter writing, buying British goods, delivering intelligence, and resisting the Patriots. MaryKate explained that, in creating this tour, she defined a “Loyalist woman” as any woman who self-identified as a Loyalist or was identified by others as a Loyalist and was associated with the British side during and after the American Revolution.

MaryKate discussed the major sources that aided her in her research, including CHS’s collection of the Serjeant Family letters, from which she was able to glean much about the experiences of Mary Browne Serjeant and her husband, Winwood Serjeant. Another key source of information was the collection of petitions to the British government for compensation for losses and services rendered to the Crown. These petitions were especially useful when women were widowed, as they would submit the claims themselves and included much more detail about their own lives and the effects of their family’s Loyalism on their financial and physical safety. Undaunted by the relative lack of traditional sources about the women of Revolutionary-era Cambridge, MaryKate detailed her efforts to read between the lines of the historical record and to use a wide variety of sources to piece together the experiences of these women. She explained that death records, gravestones, and church records can help historians gain glimpses of their lives and the challenges they faced as allies of the losing side in the Revolution.

MaryKate also detailed the ties that many of these Loyalist women had to slavery. As the daughters, sisters and wives of slaveholders, many of these women benefited financially from the riches of plantation agriculture in the Caribbean. At home in Massachusetts, many of these women also exercised power over enslaved men and women serving in their households and on their family’s farms. These men and women were also deeply affected by the Loyalist affiliations of their enslavers and, although many enslaved people did flee to the British lines during the Revolution upon promises of freedom, we have no way of knowing for certain what their political views were and whether their support of British rule went beyond their desire to be freed from bondage. MaryKate told the story of Elizabeth Vassall and Cuba Vassall to highlight the cruel inequalities of the slave system: Elizabeth Vassall and her enslaved bondswoman, Cuba, gave birth to baby boys in the same month but, while Elizabeth cherished the opportunity to watch her son grow up, Cuba was robbed of that chance when her son, Darby, was sold away from his mother when he was just a toddler. This irony is even greater when we learn that Elizabeth’s son grew up to own sugar plantations in Jamaica run by slave labor.

Following her talk, MaryKate took questions from viewers, which ranged from inquiries about her sources, to questions about the role of the Caribbean in post-Revolutionary settlement of Loyalist exiles, to a query as to how she became interested in studying Loyalist women. To this last question, MaryKate responded that she had been surprised by how many American colonists had actually supported the Loyalist cause, either actively or passively, which led her to be curious about their motives. She explained that the sources on Loyalists are largely absent of information about the specific experiences of women, despite the fact that it was often the wives and sisters of these Loyalist men who were left to run households, farms and businesses in Cambridge when their husbands and brothers fled to the protection of the British troops in Boston. Underrepresented in the historical record and underappreciated by their male contemporaries, the Loyalist women of Cambridge survived financial and personal losses, yet managed to advocate for themselves and their families in a time of great political and social upheaval.

Tags: 2020 Who Are Cambridge Women | American Revolution | Massachusetts Society of the Cincinnati