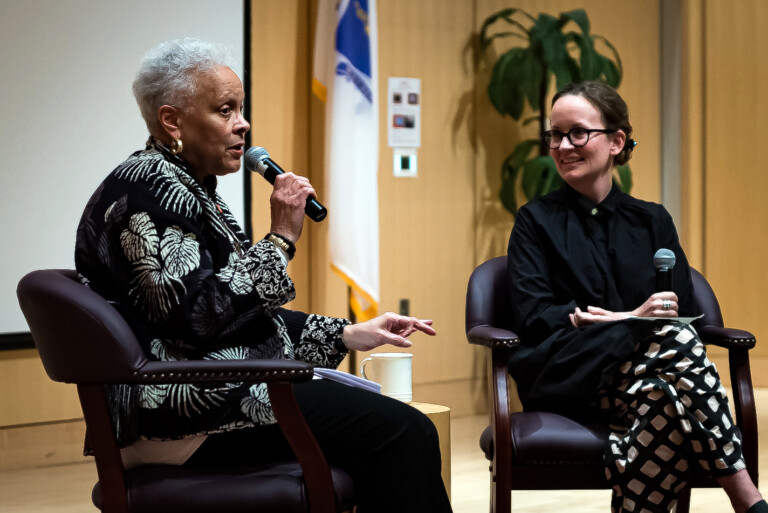 On February 25, we hosted our 2020 Opening Conversation: “Who Are Cambridge Women?” at the Cambridge Public Library. Eva Martin-Blythe, Executive Director of the Cambridge YWCA, was joined by the Society’s Doing History Curator, Diana Lempel, for a discussion of the history, mission, and legacy of the YWCA. This event marked the beginning of a year of programs exploring the contributions of women to a wide variety of areas of Cambridge history and public life.

Cambridge Historical Society executive director Marieke Van Damme welcomed the audience and acknowledged the significance of 2020 as the centennial of the ratification of the 19th Amendment giving women the right to vote. Explaining that the history of women’s suffrage is both filled with triumph over adversity and fraught with inconsistencies, omissions, and the marginalization of lower-class women, immigrant women, and women of color, she outlined the Society’s plan to use its 2020 programs to highlight the ways in which women of all colors and classes have helped to shape Cambridge over its long history, and will continue to do so in the future. (Read Marieke’s remarks here) She then introduced author and historian Diana Lempel, Doing History Curator at the Society, who in turn introduced Eva Martin-Blythe, Executive Director of the Cambridge YWCA.

In recounting her “origin story” and her journey to a lifetime of service to the YWCA, Eva described her upbringing in Topeka, Kansas, and her personal involvement with many of the social justice issues of the time. As a close friend of some of the younger siblings of the plaintiffs in the Brown v. Board of Education Supreme Court case challenging racial segregation, Eva recalled that she was always surrounded by friends and family who cared about and worked for justice for the Black community in Topeka and beyond. When she began her work with the YWCA in Kansas City over thirty years ago, she acknowledged the challenges she faced as a mother of young children who needed childcare – an invaluable benefit that employment with the YWCA provided. Eva described her young sons growing up at “the YW,” participating in many of the sports and afterschool programs as children and later coaching and leading some of those same programs. Diana echoed this description of the intersection of Eva’s life as an employee, change-making leader, and mother, remarking that women on the front lines of social movements have always needed – and found – a way to provide for the needs of children, friends, and loved ones while still “doing the work” of activism.

Eva gave the audience a brief overview of the founding of the YWCA, explaining that the organization was founded in London in 1855 by a group of wealthy women. These founding donors were concerned that the young women coming to the city from the countryside to work in mills and other industrial settings had no access to safe housing. The first YWCA in the United States was founded in Boston in 1866 on the London model, also as a boarding house for young women arriving to work in the city. The Cambridge YWCA was founded in 1891 for the same purpose. Eva explained the “triangle” model in which the YWCA strove to support the three main areas of women’s health and well-being: mind, body and spirit. YWCAs were equipped with a gymnasium (and sometimes a pool) for the development of the body, while libraries and other forms of educational programs promoted healthy minds. The spiritual piece of this triangle was at first intended to be an expression of the founders’ Christian faith; Eva explained that, although the principles of Christianity are still an integral part of the mission of the YWCA, they are inclusive rather than exclusive, and that the YWCA is open to women of any and all faiths.

Raising the issue of communal housing as a longtime theme of feminism, Diana asked Eva, “What does a house for women look like?” Eva explained that the YWCA is the largest housing provider for women and families in the greater Cambridge area, and that its housing units are divided into two models: 103 single resident occupancy (SRO) units, and a shelter for up to 10 homeless families with children. Eva described the economic, mental, and physical health challenges that bring women and families to YWCA housing, as well as the comprehensive support systems in place to help stabilize residents and allow families to successfully transition out of homelessness. She emphasized that the motto for these programs is “For women, by women, and from a woman’s perspective”; because it is often easier for a woman to disclose abuse and other traumas to another woman, a female-led support team is able to provide the most effective model of transitional care. Once families have moved out of the shelter and into more permanent housing, a stabilization worker stays involved with the family for at least six months to ensure that they are able to successfully adjust to the new responsibilities and routines of living independently. This ongoing relationship with a support network, Eva said, is the key to ensuring the ongoing success of formerly homeless families.

The audience had many questions for Eva, including inquiries about the YWCA archives, the relationship between the YWCA and the YMCA, and the challenges facing nonprofit service providers in the wake of federal budget cuts. In answering a question about its mission to empower women of all ages, Eva described the YWCA’s GOLD program (Girls Only Leadership Development) for girls in grades 7 and 8. Started by Denise Simmons when she was Mayor of Cambridge, the GOLD program provides young women with mentors and exposes them to a wide array of career choices. The GOLD program also provides opportunities to learn about STEM/STEAM and computer skills, and to discuss social justice issues and other challenges facing young women today. Eva emphasized that these girls are the women of tomorrow, and that an investment in their development is an investment in future leadership.

Learn more about the Cambridge YWCA’s role in labor activism in the 1890s-1930s here.