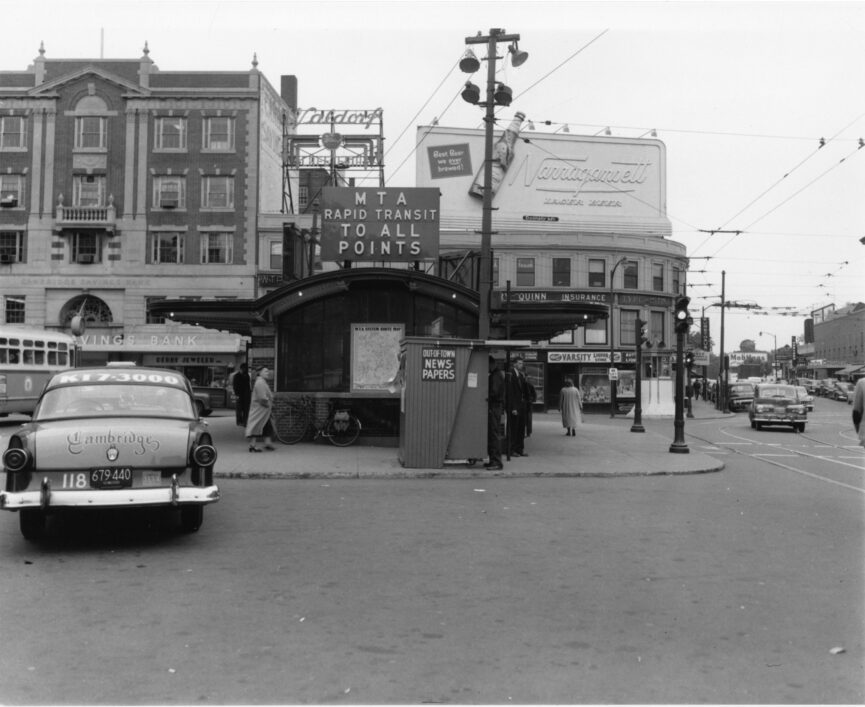 The original Out of Town News building in 1955. Image via Cambridge Historical Commission. Original in MIT Museum collection.

This presentation was given as part of a Cambridge Historical Society program called “Conversations on Harvard Square” at the New School of Music in Spring of 1999.

I know a lot of folks here. I’ve seen a lot of you. I’ve sold newspapers to a lot of you here. When I first came to Harvard Square it was 1944. I helped my dad. My dad wasn’t well at the time; I was 13 years old, and I was going to school. My mother used to say at 4 o’clock a.m. “You’ve got to get up and help your dad.” I sold newspapers at Harvard Square. I can recall street cars coming here with people from North Cambridge, Waverly, and Watertown. It was really something. It was an inspiration.

I arrived during the war years. On “V” day I sold the Boston Post. It was 2 cents. WAR IS OVER — it was just unbelievable. A person would come by and give you a nickel and he says “Keep the change, kid”. It was pennies, but pennies made nickels and nickels made quarters. It was unbelievable to see and hear and feel the people that were there; it was an education.

My dad just sold the Boston newspapers. There was the Globe, Traveler & American, the Herald in the morning, the Record in the afternoon, the Transcript. And we’d sell in the morning probably around 1,800 to 2,000 newspapers; and that’s from 4 in the morning until 9 o’clock, 9:30.

(When I had to stay) out in the street, no place to go, I went to the Waldorf which was across the street to warm up to get a cup of cocoa. I’d go to Hazen’s Lunch across the way at Holyoke Center. They had cupcakes there. The owner, John Hooley at the time, would say, “Come on, I’ll buy you a cup of coffee” — “No, I take cocoa.”

I’ve seen a lot of things since 1944 — changes. I’ve seen the Slates, the Sages, the Kramers — we were all acquaintances, friends. We worked together through the (Harvard Square) Business Association. It was the banks that ran Harvard Square — Harvard Trust, Cambridge Trust, and Cambridge Savings Bank.

I started Out of Town News because the students wanted the Chicago paper, the Minneapolis paper, the Philadelphia paper, the London Times… People would ask me, and I would write to every newspaper in the country. I went to the library and I saw who the publishers were. I met John Johnson of Ebony Magazine. He took me under his wing.

[Sheldon founded Out of Town News in 1955 and sold the business in 1994. He also operated Reading International, a bookstore on the corner of Brattle and Church Streets, which specialized in local authors. He is now the proprietor of Community Mapping.)

Our Candy Making Self-Guided Tour of Cambridge is