This collection was featured at our 2019 Open Archives.

In 2019, the Massachusetts Society of the Cincinnati generously provided funding to digitize and transcribe the Cambridge Historical Society’s Serjeant Family Letters (formerly titled “The Winwood Serjeant Letters”). The collection is now accessible online (view it here).

Winwood Serjeant (c.1730?-1780) was born in England and ordained in 1756. Following his ordination, he was sent to South Carolina as an Anglican Missionary. Mary Browne Serjeant (c.1736?-1808?) hailed from Portsmouth, New Hampshire. The two wed in 1765. In 1767, Winwood Serjeant became the third rector of Christ Church in Cambridge, Massachusetts. While he served in that position, the family resided near Brattle Street, an area that was home to many loyalists during the Revolutionary Era and the current home of the Cambridge Historical Society. Though not markedly outspoken, Winwood Serjeant supported the crown, a stance shared by the majority of congregants at Christ Church.

All but one letter in the collection were written to Mary Browne Serjeant’s sister, Elizabeth Browne Rogers. Winwood Serjeant’s last letters voice his growing concern about the political strife:

“Boston is in a terrible situation, & will be much more so if they do not submit to government before the Fall…” [15 June 1774]

These letters offer insight into the life of a Loyalist family in the years leading up to and following the Revolutionary War. They illuminate the connections between family and religion during this era of American history. They also shed light on colonial New England’s involvement in slavery. Though these letters once piqued the interest of historian and author Samuel Batchelder, there has been little additional scholarship on this rich collection.

The Cambridge Historical Society is indebted to the Massachusetts Society of the Cincinnati for making possible increased access to this unique historical collection, and for its past assistance in providing funding for our website, cell phone guided tours, digitization, and online exhibitions. 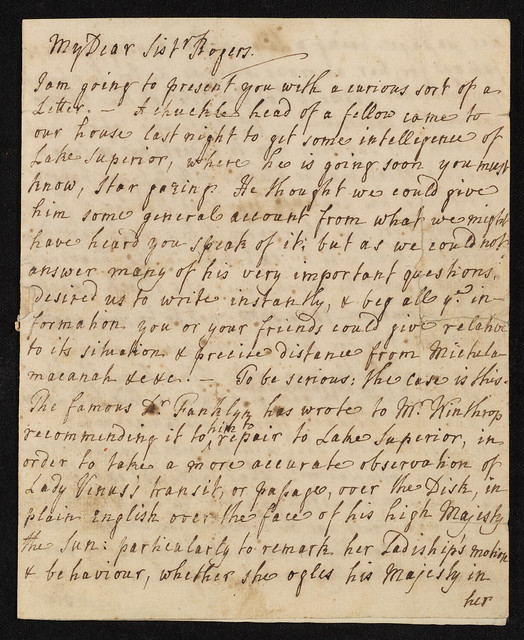 This collection can also be viewed via Flickr. To learn more about the Serjeant Family Letters, please see the finding aid and transcriptions.