If you’ve read anything about Richard Buckminster Fuller (1895–1983), you probably know that Fuller was kicked out of Harvard College. And not just once, but twice. He never graduated. You may not know, however, about some of his more positive experiences in Cambridge, including a stint as a visiting Harvard professor in the early 1960s.

In May of 1929, the Harvard Society for Contemporary Art presented an exhibition called “4D,” which displayed a model of Fuller’s Dymaxion House. During the exhibition, Fuller himself lectured and demonstrated the features of the house daily. He used 4D to reference the fourth dimension – time – to emphasize his preoccupation with efficiency. His six-sided house was designed to be affordable, easily assembled, adaptable, and virtually self-sufficient. Inspired by Henry Ford’s automobile plants, Fuller hoped his house would be similarly mass-produced.

The local press covered the HSCA exhibition with bemused interest. On May 21, 1929, the day after the show opened, the Harvard Crimson ran a fairly objective story outlining the principles of Fuller’s design and announcing details of the exhibition. The next day, the Crimson took a more critical stance. The unknown writer described the translucent, plastic walls, inflatable doors and floors, and its central, collapsible mast, then expressed concern for the architectural profession and aesthetics if the concept caught on.

A headline in the Boston Globe of May 20, 1929, declared, “Hangs His House from a Mast Instead of Resting It on Ground,” and described the exhibition and Fuller’s “highly revolutionary idea on housing.” It detailed some of its more unusual features: “To open the door, you press a button which deflates the door, to shut it you blow it up….The bathroom is no longer a collection of fixtures – it is a “sculptural unit,” made in one piece. “All this and much more sounds freakish,” the Globe reported, but then reassured, “Mr. Fuller is no crank. He is an accomplished engineer. He has served in the Navy and is sane enough to have been entrusted with the command of a destroyer…”

The young Philip Johnson, then an undergraduate at Harvard, attended one of Fuller’s lectures that week. Later he reminisced: “That Dymaxion House, I disliked it very much, but that made no difference. You see the point is…that I learned vast amounts of the potentialities of architecture that I never forgot – from that show” (Nicholas Fox Weber, Patron Saints: Five Rebels Who Opened America to a New Art, 1928-1943, New York, 1992, 68).

The Marshall Field department store in Chicago presented the first public display of Fuller’s house in April of 1929. The public relations people at the store disliked Fuller’s 4D, and worked with him to come up with a new term. They had him talk for several hours as they wrote down words that inspired them. Syllables from “dynamic,” “maximum,” and the scientific term “ion” became Dymaxion. They patented it in Fuller’s name and it soon became the catchall referent.

In March of 1930, a model of the Dymaxion House was displayed again in Cambridge, this time in the lobby of the Fogg Museum, with Fuller again present to lecture. The following February he spoke at the Harvard Club in Boston under the auspices of the Harvard Engineering Society. He again illustrated his lecture with a model of the Dymaxion House and, as the Crimson of February 2, 1931, reported, also used “pictures showing the application of new and revolutionary ideas to the business of everyday living.”

The Dymaxion Car also came to Cambridge on an April morning in 1934, when it was driven through Harvard Square. The Harvard Crimson of April 16 described the scene: “A strange looking, 19-foot, rodent-like vehicle meandered up and down on Massachusetts Avenue in the neighborhood of the Square on Saturday morning.” Two months later, Fuller’s three-wheeled car was an attraction at a week-long open house at the Ford Motor Company assembly plant in Somerville. The Boston Globe of June 7 ran a photo, calling it “a radical departure in automobile design.”

Although neither the car nor the house caught on with the public, Fuller, of course, continued to invent and had a long career in engineering, technology consulting, and as a board member for many companies. In the academic year 1961-62, he was back in Cambridge, living at Quincy House on the Harvard campus, serving as Charles Eliot Norton Professor of Poetry.

By the early 1960s, Fuller had made his reputation and was considered a philosophical sage but was still bent on solving all the world’s problems. “Buckminster Fuller is technology incarnate,” wrote Michael Gruen in the Harvard Crimson of February 27, 1962. In an early piece on one of his Norton Lectures, Gruen noted, “Fuller spoke for two and a half hours without script or notes. ‘Thinking out loud,’ he began slowly, but later spewed forth his thoughts at breakneck pace” (Crimson, February 23, 1962). 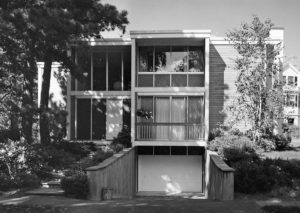 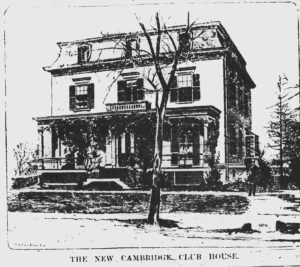