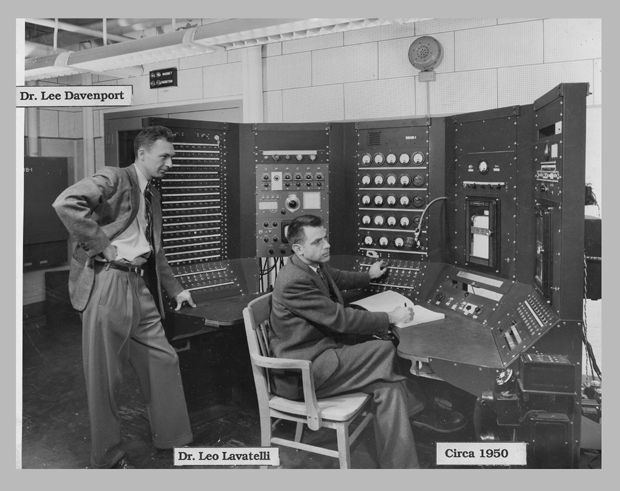 Courtesy of the Office of Naval Research, U.S. Navy

For nearly 65 years, the corner of Oxford and Hammond streets was home to a nuclear family quite unlike the others in the neighborhood. This one was large, mostly male, heavy on the PhD’s (with a few Nobel winners thrown in), and was housed in a pair of buildings called the Harvard Cyclotron Laboratory (HCL). Demolished in 2003, the cyclotron and its control building were central to experiments and discoveries that shaped modern nuclear medicine and, in its first incarnation, the development of the atomic bomb.

Cyclotrons were one of the first types of particle accelerator, using strong magnetic and electrical fields to speed subatomic particles (such as electrons, ions, and protons) along a circular path. The resulting beam of highly charged particles can be used for anti-tumor therapy or to activate a variety of reactions in physics experiments. Harvard’s first cyclotron was completed in 1938, a few years after the machine’s invention by Ernest Lawrence of the University of California in Berkeley. Its magnet weighed 85 tons.

The lab had clocked over a thousand hours of operation by the time the U.S. was drawn into World War II in 1941, and the cyclotron’s fate was quickly altered by the start of the Manhattan Project. Secret negotiations between Harvard’s president James B. Conant and the head of the project, General Leslie Groves, resulted in its being sold to the federal government for a dollar. According to a history written by Harvard physics professor Richard Wilson, secrecy demanded a cover story: the device “was needed for medical treatment of military personnel and it was sent to St. Louis to be forwarded to an ‘unknown destination’ (Los Alamos).” Harvard physics department chairman Percy Bridgman was reported to have told the government scientist overseeing the transfer, “If you want it for what you say you want it for, you can’t have it.  If you want it for what I think you want it for, of course you can have it.”

After the war, Harvard wasted no time constructing a new cyclotron. With the U.S. Office of Naval Research paying for the machinery and the university paying for the buildings, the new Harvard Cyclotron Laboratory was dedicated on June 15, 1949. This time the magnet consisted of 641 tons of steel and 74 tons of copper, big enough to make it the third-largest in the country; the size of its 14-foot diameter coils was dictated by the clearance of the railroad bridges between Cambridge and the General Electric plant that built them in Pittsfield.

The buildings themselves were the work of the venerable architectural firm of Coolidge, Shepley, Bulfinch & Abbott, successor to a partnership founded in 1874 by H. H. Richardson. In a 2001 report, the Cambridge Historical Commission described them as modernist structures, the Cyclotron Building “an understated but elegant building” whose “overhanging concrete cornice and glass-block frieze provide just enough ornamentation to keep the building from being a plain concrete vault.” That concrete, where it surrounded the cyclotron, was three feet thick. The machine itself operated silently, its output of 160 million electron volts producing a beam of protons traveling at half the speed of light and capable of penetrating about 17 centimeters of tissue.

“The thing that makes protons shine,” says Bernie Gottschalk, who was a senior research fellow at HCL from 1981 to 2002, “is that they can be steered and focused very precisely.” This made the Harvard beam particularly effective at destroying growths like eye cancers and those near critical structures such as the brain or spinal cord. During its heyday, HCL was by far the foremost proton therapy facility in the world, says Gottschalk, taking patients referred, from the U.S. and many other countries, to Mass General and Mass. Eye and Ear. Some 18 Harvard technicians were charged with keeping the equipment running, while the clinical team came from MGH. Other lab work included studies of potential cosmic radiation damage of spacebound equipment for NASA and AT&T.

All good things come to an end, however, and so they did for the cyclotron when Harvard decided to put up new science buildings on its spot. On April 10, 2002, the cyclotron treated its last patient—its 9,115th. The machine was shut down on June 2, and the facility was dismantled soon afterwards, the giant magnet cut up and sold for scrap. Still, the technology and procedures used so successfully at the corner of Oxford and Hammond live on: there are currently 12 proton therapy cyclotrons at work in the U.S., with 15 more under construction.

Thank you to our good friends Cambridge Volunteer

#ICYMI - our recap of our History Cafes tops this

In post-Covid life, what would you keep and what

Our work is made possible through the generous sup

Stories of the early African American community in

Neighbors read and discuss “What to the Slave is

What does the 4th of July mean to you? ⠀ It carr

Share your love letters with us for our August 10