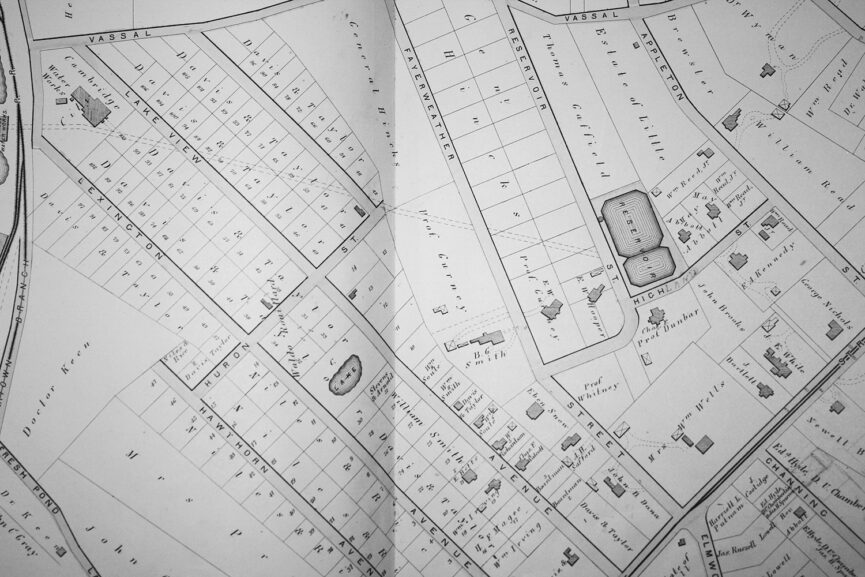 From the 1873 Hopkins atlas of Cambridge, History Cambridge collection

Cambridge’s streets have histories and stories, just as the city itself does. And among those stories, Huron Avenue is one of the richest – and one with a bit of mystery.

There are three main sources for these histories. The detailed records compiled by Lewis M. Hastings, the city engineer from 1889 to 1932, frequently identify for whom a street was named. Those published in 2005 by Christopher Hail, a librarian at Harvard’s Graduate School of Design, also include the records of every building along every street. And “Streets and Ways,” the updated records published by the City Engineer’s office, provides the dates that succeeding sections of a street – six in the case of Huron Avenue – were laid out, along with their widths and lengths.

These sources are now being compiled and edited for publication online by the Cambridge Historical Commission. [buy it here!]

According to Hastings, the initial section extended from “near Hawthorne Avenue [now Grozier Road] to near what [was then] known as Standish Street.” The name first appears on a subdivision plan to link Lexington and Lake View avenues, filed in 1871 by the developers, Person Davis, T. Alfred Taylor, and Reuben Demmon. It then appears on the Hopkins map of 1873.

Augmenting such records are the lively Cambridge Chronicle accounts from the late 1800s. In November 1872, reporting on a proposal to widen and extend what was then known as Huron Street, the Chronicle opined that “such an avenue could not fail to improve the value of property in this region.”

But in December 1891 the Chronicle reported that “the only apparent hitch in the proposed widening and extension… is in fixing the character and size of a curve at the junction of Sparks Street and Vassal Lane.” The original plan “would obliterate a row of spruce or pine trees which…[Morrill] Wyman planted himself and which form a shelter to the house from the bleak north winds.” But, the Chronicle went on, “the matter can and will be adjusted, probably to the satisfaction of all concerned.”

To the mystery: The name of the street was changed to Huron Avenue in 1894. However, the records give no clue to who gave it the name of “Huron” in the first place – or why.