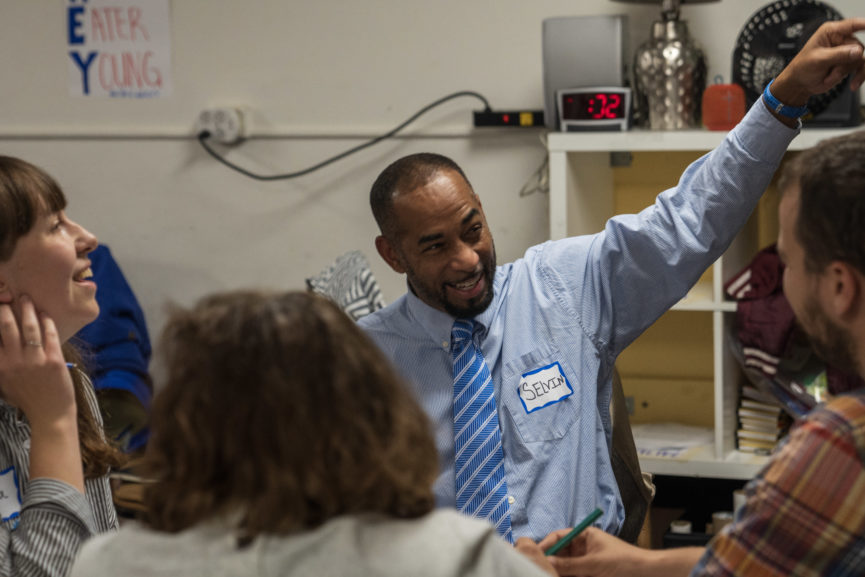 Diana Lempel, the Doing History curator at Cambridge Historical Society, led the oral history narrators, interviewers Katie Burke and Lina Raciukaitis, and Loop Lab recording team through a reflection on the Sweet Souls Oral History Project thus far. Together they discussed the history of the Margaret Fuller Neighborhood House (MFNH) and their connections to it.

Narrators George Greenidge, Selvin Chambers, and Marian Darlington Hope revisited some of the stories they shared in the oral history interviews. As a child, Selvin enjoyed the free breakfast program provided by the Black Panthers at MFNH. He recalled how the national media framed the Black Panthers as threatening, but his experience upended this depiction. Instead, he was grateful for the bacon, eggs, and orange juice he and other children received in the 1970s.

George Greenidge and Marian Darlington Hope remembered the summer camps organized by MFNH to Sharon, Massachusetts, where these trips “were an extension of the Margaret Fuller Neighborhood House.” They also mused on the “golden age” of parties in the MFNH basement, when the windows would fog up and they would dance to the music popular of that time.

Having also grown up with the MFNH and other Cambridge youth centers, Tevin Charles and Jeff Solomon from the Loop Lab team shared how many experiences described by the older generation mirrored their own—from dance parties to singing the same songs. Tevin also shared how playing sports connected kids from across different Cambridge youth centers who may not have interacted otherwise.

Following this reflection, audience members and the oral history project team sat at small tables and broke into group exercises. Each group brainstormed questions they would like to hear in future oral history interviews, as well as feedback for the project team.

Some of the questions generated included:

The Loop Lab filmed and photographed the event. Stay tuned for a link to the video soon.

This program is funded in part by Mass Humanities, which receives support from the Massachusetts Cultural Council and is an affiliate of the National Endowment for the Humanities.