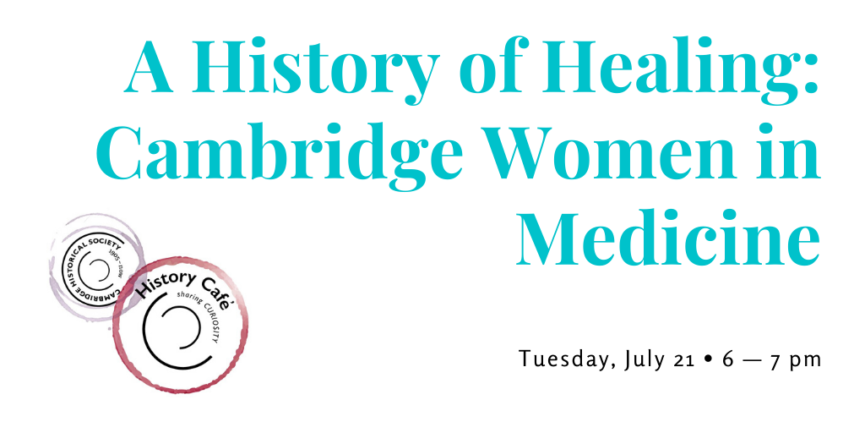 On Tuesday, July 21, CHS held our first digital History Café, “A History of Healing: Cambridge Women in Medicine.” Dr. Ellen S. More, Professor Emeritus at the University of Massachusetts School of Medicine, joined us for a discussion of the role of women in the medical profession in the 19th and early 20th centuries. This program is a part of our year asking “Who Are Cambridge Women?”

We began the program by exploring the nature of “women’s work”: what kinds of labor (both paid and unpaid) have traditionally been assigned to women? How have gendered assumptions shaped the distribution of labor, and how have these assumptions shifted over the past two centuries? Dr. More spoke about the Victorian ideal of women as nurturing caregivers, both within their own households and in the broader world through charity work. Women physicians were able to use these stereotypes to their advantage when they entered medicine, arguing that their maternal instincts made them natural candidates for the healing arts. But their work was largely limited to the treatment of women and children rather than male patients, and their professional caregiving was often in tension with the care of their own families.

Dr. More used the case study of Dr. Sarah Dolley to illustrate this tension; one of the first American women to graduate from medical school, Dolley set up a joint practice with her husband, also a physician (and her former professor). When he died, leaving her a widow, she made the difficult decision to send her teenage son away to boarding school, knowing that she could not sustain both a successful medical practice and full-time motherhood. Dr. More had the opportunity to view the collection of letters that Dolley and her son wrote to one another during this period, and she described them as a wealth of information about the work/life balance that women strove for but seldom achieved – and for which they are still striving today.

Dr. More also discussed the issue of self-presentation among women physicians, particularly with regard to gender. She described the “proper” appearance of the woman doctor in the nineteenth and early twentieth centuries – conservative, feminine but not alluring, sober and serious – and discussed how a few women challenged this standard by wearing jackets and ties along with their skirts. The assumption was that masculinity was the hallmark of leadership, and so these women assumed the outward trappings of male clothing in order to make themselves appear more qualified for the role of leader in their professional life.

It was not only in appearance that this trend toward masculinity staked its claim on female physicians. During and after World War I, the practice of medicine became more closely tied to the hospital system – a shift which proved detrimental to women’s advancement in the profession. As doctors needed to pass through the hospital framework in order to train for specializations, women were systematically excluded from these training programs and were thus largely unable to enter specialized medicine. It was not until the 1960s and 1970s that women were successfully able to push for increased access to the hospital system of medical training, although this effort took many years as well as legal action on behalf of female medical students and interns. Dr. More concluded her discussion by reminding us that the struggle for full gender equality in the medical profession is still ongoing, citing recent findings that verbal and sexual harassment continues to plague women physicians. And women in the medical field, like women in so many other areas, continue to work at finding the balance between their personal and professional commitments as we continue to ask, “What is women’s work?”