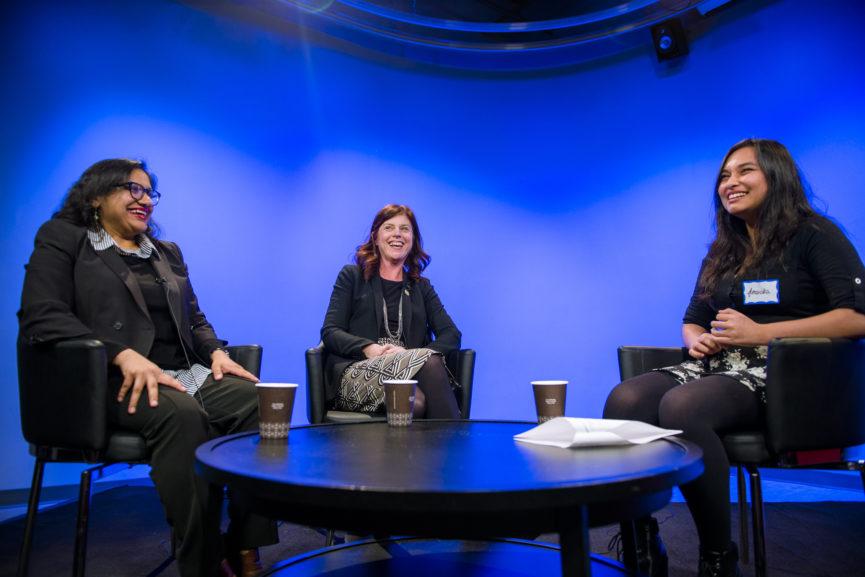 Thank you to everyone who joined us at the April 10 History Café: Digital Engagement, with City Councilors Sumbul Siddiqui and Alanna Mallon and moderator Smarika Suwal. The event, held at CCTV, drew an engaged crowd.

Prior to the City Councilors’ conversation, we asked attendees to share their thoughts on “How do you participate in Cambridge-based activism?” Some of the answers included:

These comments from the audience set the stage for the lively discussion between Mallon, Siddiqui, and Suwal. Siddiqui and Mallon spoke about their podcast “Women Are Here” and engagement in the digital realm. Suwal asked how the city councilors selected podcasting as a medium for engagement, who are their role models in the political work they do, and what are the issues they believe are most pressing in Cambridge.

The councilors spoke extensively about diversity, past and present sites of activism across the city, and Cambridge housing and affordability. Siddiqui commented that she has “realized how hard it is to stay in Cambridge. Affordable housing is our number-one issue in City Council. This affects me daily—people facing eviction or looking for a place.”

Mallon shared that it is “…devastating seeing people have to leave here. The services we have here (in Cambridge) are so much better than what exists in cities nearby. I have meeting after meeting with people who are facing eviction.” Both councilors also discussed what it means to them as women to engage politically and through social media.

The night ended with CHS executive director Marieke Van Damme facilitating a discussion with the audience by posing the following questions:

Attendees’ answers will be catalogued and archived at the Cambridge Historical Society to help educate future Cantabrigians on the relevant issues, concerns, and interests among residents in 2019.

If you were unable to attend our first History Café, you can watch a video recording below. The event was also audio-recorded and is featured on the April 10, 2019 episode of Councilors Mallon and Siddiqui’s podcast “Women Are Here.”

We at Cambridge Historical extend our thanks to City Councilors Siddiqui and Mallon, as well as Smarika Suwal, for agreeing to speak at our first History Café of 2019. Thank you to CCTV, especially Susan Fleischmann, Seth Myers, and CCTV interns, for hosting and recording the event. We are grateful for our volunteers and those who live-tweeted the evening.