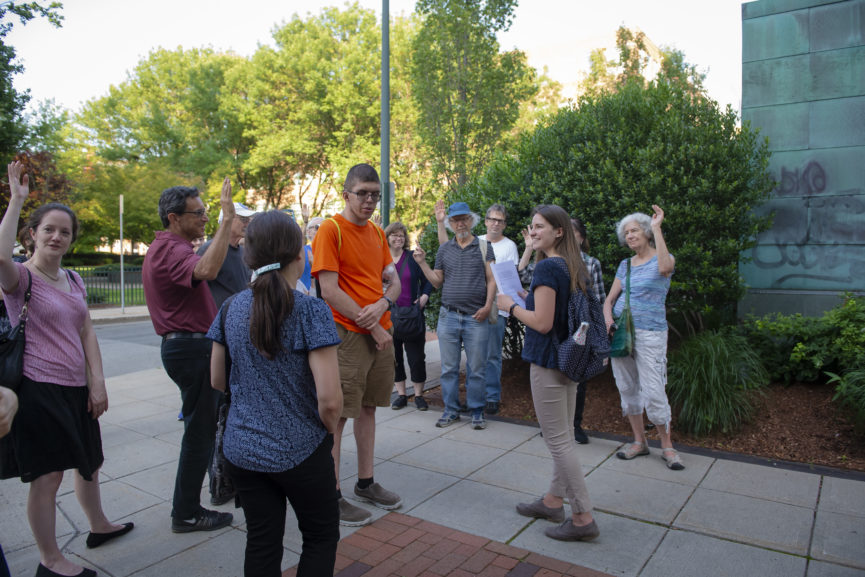 Approaching local history through the question “How Does Cambridge Engage?” has given me an interesting lens into the city’s years of activism and community-building. Throughout the summer of 2019, I spent many days strolling Cambridge’s streets, sifting through archives, and talking with local residents. When I first began research for the history walking tour, I had many questions about the issues that have concerned past and present Cantabrigians. It was not hard to find examples. Neighborhoods, housing, civil rights, arts, transportation, and many more subjects frequently reappeared in conversations and documents. More difficult was choosing physical places in Cambridge tied to each of these issues, simply because of the deep history of activism in many neighborhoods. Central Square, a central part of the city in more ways than one, stood out as a place that brings many stories together.

Within a short walk from Central Square, one can see community art projects created by youth at the Community Art Center. A nearby 1994 mural by David Fichter, The Potluck, captures the faces of many local residents, including individuals who have since left The Port, a neighborhood formerly known as Area 4. Across Massachusetts Avenue, the neighborhood around the University Park/Sidney Street area reveals recent development in Cambridgeport which once sparked significant activism regarding housing, industry, and gentrification. Within a mile down the road at 888 Memorial Drive, a building once underutilized by Harvard University was occupied by feminist groups in 1971, who were inspired by community activism in Riverside and women’s groups near Central Square. Although diverse, each of these grassroots moments of activism reflects local concerns merged with national movements, all within communities and neighborhoods in the immediate vicinity of Central Square.

Although I came across numerous examples of activism in Central Square that predated the mid-twentieth century, the bulk of my research focused on activist moments between the mid-twentieth century and now. While Cantabrigians certainly engaged in the city prior to this time, the 1960s and 1970s saw unprecedented growth of organizations around Central Square active in the social movements of the time. For myself, this internship presented an opportunity to explore questions of community engagement that have long interested me. One particular question that guided the direction of my research was how local activists and movements have emerged at specific moments in Cambridge’s history.

In pursuing this subject I quickly found that many activist groups in the 1960s and 1970s created lasting changes in Cambridge and influenced later local efforts. For example, the Women’s Center shows how organizations have adapted to issues as they have shifted over time. Formerly known as the Women’s Educational Center, the Women’s Center has moved away from its earlier educational focus toward community-building. Other examples demonstrated how causes have evolved through a succession of many groups and efforts over time. Although anti-war organizing after the 1970s was no longer in specific response to the American War in Vietnam, it continued to address other related concerns in national and global history. Growing out of earlier activism against the nuclear arms race of the Cold War, Nuclear Freeze Cambridge sought to halt nuclear weapons research and development in the city starting in 1983. Although efforts to prohibit the development of nuclear weaponry ultimately failed, the grassroots effort again led to renewed local activism by Cambridge Sane/Freeze in 1989 and Massachusetts Peace Action in 1993 to promote international security and nuclear disarmament. Even more recent activism around the subject of nuclear divestment and weapons technology development shows continued activism around issues that largely trace back to earlier university protests in the late 1960s.

Conversations with individuals and organizations engaged in city-based movements also revealed to me a commitment to and tremendous sense of local history underlying much of the ongoing activism near Central Square. This further highlighted the connections and intersections between Central Square’s historical moments of activism. I enjoyed studying the links between past and ongoing activism in an urban landscape that is itself continually changing.

For further reading about the anti-war, nuclear freeze, and nuclear divestment in Cambridge: