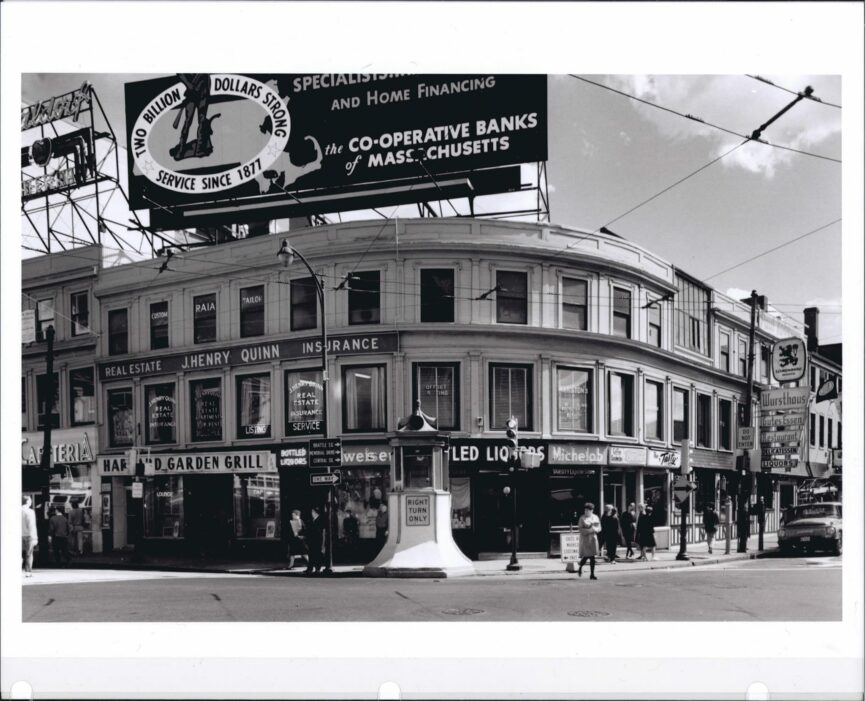 Cambridge Historical Commission helped us unearth this photo but tell us there were two police kiosks in Harvard Square during that time.

#HCHistoryHive, we’ve got another mystery for you to solve! This one’s from Pat P. of Naples, FL. Share your memories of this time and place….

“I am writing an essay about a trip to the Boston area in 1963. My buddy and I went there to see a friend who was attending Harvard. When we drove into Harvard Square we were confused by the light signals. For example we had never seen a signal with both the red and yellow glowing simultaneously. So we just stopped dead in our tracks not wanting to break a traffic law. At that time we heard a loud police whistle and yelling. We could not see the officer and to our dismay he came climbing down from a roost up on a pole. We would love to find out if our memory was correct that he was in a roost and if so does a picture of it exist.”

Our friends at Cambridge Historical Commission helped us unearth a photo but tell us there were two police kiosks in Harvard Square during that time. The first was on the corner near the Coop. The one Pat is referring to was in front of the Read Block pictured here.

Our social media following had quite a bit to say on this topic:

John Hall: I remember these. Actually in Lexington center there was 1 til just a few years ago.

Michael Sico: Just to the right of the cop stand is The Tasty. Greatest .25 cent grilled hot dogs. When we kids didn’t have enough money the kind gent who worked there would give us a nickel special. Toasted hot dog roll with mustard relish & onion with no hot dog. It was delicious on our way to the YMCA in Central Square!

Helene Martel: My mother’s godmother owned the Harvard Garden Grill. I remember going there in the 60’s when I was a little girl. I think her name was Kefalos. It definitely existed.

Barbara Macmillan: Never in Inman Square. I lived there then and there was never a police booth in the Square. Also “Harvard Garden Grill?” Never.

Sacha Rockwell Sullivan: I remember these. I’m old. The police would change the directional lights. The part of mass Ave that went into Brattle st was open to traffic. When they expanded and modernized the Harvard t station, it was blocked to traffic.

Elaine M. Casey: I think that Officer Scalese was in the booth in Inman Sq

Barbara Macmillan: OMG I haven’t heard that name in years. Once he came to our house to arrest my brother and my mother offered him some pasta we were having! My brother was mad for years over that one!!!! He shouldn’t have gone awol!!!!!

David Mcqueeney: Looking at the picture of Harvard Sq i can see the police roost fight in the middle of the picture. Those were awesome back in the day.

Richard Lyons: There was also one in Central Square at the junction of Mass Ave, River Street, Western Ave and Prospect St.

Karin Joyce: I remember the roost so well and happy to see a photo of it. There was another spot that a policeman sat, in front of Harvard just near the underpass to head down Cambridge and Broadway. I think it was an information booth. My mother knew the policeman who manned the spot and would walk over for a chat when we were in the square but I don’t know who it was. I was pretty young.

Joanie Gearin: There was one on Fresh Pond Parkway at Rindge Ave too. I never saw it in use (late 1960s) but it sat there for a long time!

Get the buzz with our History Hive >>